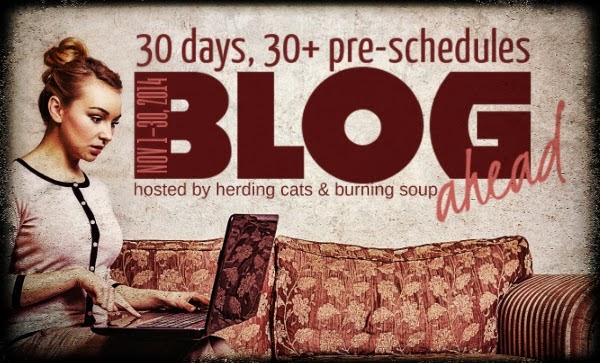 I signed up for the Blog Ahead Challenge hosted by Herding Cats & Burning Soup.

The basic goal is to get "ahead" in your blog posts.

At the end of the month of Nov you'll have 30 additional pre-scheduled posts than when you started the month. I already have a few posts scheduled but I'm hoping to get at least 30 more done by the end of this challenge.

It's nice to get a few blog posts pre-scheduled and have a little breathing room to work on other blog posts so why not join us? Any types of blog posts are welcome. 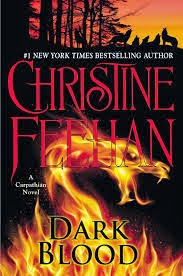 At long last you are truly back with us...

Zev Hunter was an elite warrior, a dark-blood dealer of death to rogue Lycans who preyed on mankind. He was a loner, never given to personal attachments, and damned fierce at his job. But Zev begins to question his past and his purpose when he awakens in the darkness of the sacred cave of warriors—and is soothed back to consciousness by the sensuously familiar voice of one woman, the woman who has haunted his fantasies for centuries. She was Branislava, member of the Dragonseeker clan…

Mother Earth called the ancients to witness your rebirth…

For this half-mage, half-Carpathian temptress, the ritual of awakening Zev to the council of warriors was the only way to save him. Locked away for his own protection, the time has now come for his rebirth, for his blood to stir with that of the ancient warriors before him. He has been assured by Branislava that their fates are entwined, that their spirits are woven together for eternity and that his new purpose in life is beyond imagining.

Now, with a blood-sworn vow of honor, mercy and endurance, and under the influence of a siren as bewitching as Branislava, Zev begins to wonder what his purpose is, what it means for the future of the Carpathians and what it is about his rebirth that he has to fear…

This is the 3rd book in the Dark Series Trilogy, which is also a part of the bigger Dark Series of books that now spans 26 books. I've been reading this series for many years and have all of the books. This is actually the first series that I ever started reading, ever.

With that said, I have to say that this is not my favorite book in the series. Most of the books have been very easy to read, easy to become enthralled in and kept my attention the entire book but this one did not. It's not a bad book, it's just not as good as some of the first few books in the series. Not everyone is going to like every book in a series and this is that book for me. But that doesn't mean I am giving up on the series. This is also a trilogy inside a series and the trilogy revolves around the Dragonseeker bloodline as well as the Lycans. While it was interesting to find out what happened to Branislava and her sister in the ice caves and learn about the Lycans, half bloods and Dark Bloods..there was also a lot going on in this trilogy and in this last book in the trilogy.

It felt like the author was trying to make sure anything that was left out in the first two book was covered in this one and the story wasn't as cohesive because of this. On top of that the relationship between Zev and Branislava felt rushed and pushed on us. They already had feelings for each other and because the life mate thing is there I can understand them having an instant connection to one another but it still felt rushed to me. Zev is very alpha and dominant so there is a slight curve into BDSM but I thought it was well done. He definitely likes being in charge but it was consensual since she didn't seem to mind even when he was a bit rough and wild.

I've come to think of this series as paranormal romance but this book felt more like erotic horror than romance. While there are paranormal aspects to this book, we also get a lot of fight scenes, violence, bad guys and hell hounds. At one point I felt like I was reading an episode of Supernatural when I saw hell hounds. There's a plot twist that I didn't see coming but that I thought was contrite and really made me shake my head at where this story went. If you have been reading this series from the beginning you will undoubtedly shake your head as well because it really was ridiculous.

These books are supposed to make sense on their own if you haven't read the series but I think if I hadn't read the other books first I would have been lost as to who the other characters were, why they were there and how they fit into this story line.

I can only hope that Ms. Feehan gets back to the roots of this series and gives us what we loved when we started reading it to begin with.