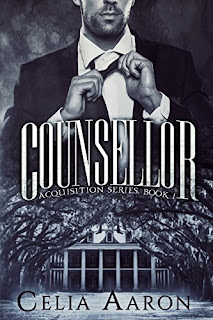 In the heart of Louisiana, the most powerful people in the South live behind elegant gates, mossy trees, and pleasant masks. Once every ten years, the pretense falls away and a tournament is held to determine who will rule them. The Acquisition is a crucible for the Southern nobility, a love letter written to a time when barbarism was enshrined as law.

Now, Sinclair Vinemont is in the running to claim the prize. There is only one way to win, and he has the key to do it — Stella Rousseau, his Acquisition. To save her father, Stella has agreed to become Sinclair's slave for one year. Though she is at the mercy of the cold, treacherous Vinemont, Stella will not go willingly into darkness.

As Sinclair and Stella battle against each other and the clock, only one thing is certain: The Acquisition always ends in blood.

Full disclosure: This book is a dark romance and is the first of a completed series.

Sinclair Vinemont is the district attorney in their community and is railroading Stella's father so that he might spend years in prison. Stella puts herself on the line and agrees to be Sinclair's slave for a year in order to keep her father out of prison.  He's participating in the Acquisition Trial's where each of the families first born heir's must acquire an acquisition (slave) to go to the ball as well as other events and be their slave for a year. Each heir is competing to be the Sovereign of the community for the next ten years. Sinclair is a heartless ass and the more I read, the madder I got. I wanted to slide a skewer through this guys eyeball at one point.

There are several 'trial's' that the acquisitions had to endure when the community got together like a party over the years time. But it was no party for the slaves. They were branded, whipped, hurt and degraded. This was more than just a dark romance, it was an all out torture-fest. I almost stopped reading several times but I needed to see how this was going to end. Sinclair wanted to be Sovereign so he participated even though at times it seemed like he regretted what was happening.

I started reading this after reading a review for it on another blog a while back. I thought, I'm in the mood for a dark romance so why the hell not. I was not expecting much and while the story line started out good enough it really had some huge flaws, at least to me. First one being, why didn't anyone ever go to the authorities outside their community for help and to stop this? Hell, the FBI or even a detective in a police department could have put a stop to this. Because this was highly illegal and down right crazy. It's just wasn't believable in that way. Even if someone had tried to go to an outside law enforcement agency and gotten caught and killed, would have made this more believable.

Then it ended on a huge cliffhanger. My recommendation? If you have it on your kindle, just delete it. It's not worth the read.