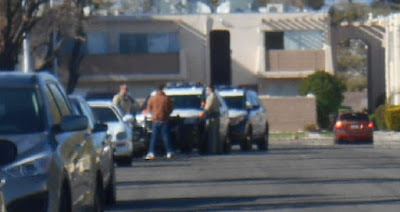 The picture is blurry because it was taken from about a block away. Two police cars had someone stopped in front of their car and ended up arresting him for some reason. Both police cars were there for well over an hour. 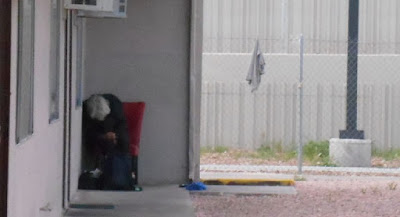 When I stepped out my door I saw that my neighbor's homeless brother was sleeping in the chair by his door again. He was bent forward so that's the top of his head you're seeing. He and his brother got into a shouting match a couple of weeks ago and I didn't see him sleeping outside for a couple of nights but he's back. The guy who lives there told me that his brother is a meth addict and he steals from him so that's why he doesn't let him inside his apartment but let's him sleep in a chair by the door so he has a safe place to sleep and he brings food out to him too. So that's what's I've been talking about for a while when I mention the brother who sleeps outside his brother's door. 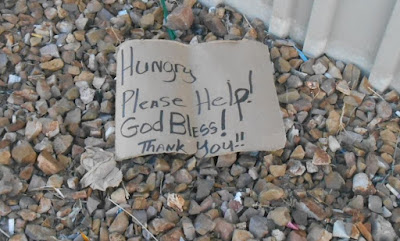 There's been quite an increase in homeless people hanging around my apartment building lately and I've been seeing more of these signs on the sidewalk.

Ken was transferred to rehab/physical therapy to see if he can strengthen his leg and arm enough to safely come home. I don't know how long he'll be there. The hospital said he has to see an oncologist outpatient when he comes home for any treatment they want to give him. So I've been calling different places to get some sort of transportation set up for him to go to doctor appointments.

So that's it for this week's Apartment Hell  Life! Be sure to come back next week for more.
Posted by Mary Kirkland at 12:00 AM 61 comments