When I took Falcor out first thing in the morning I spotted a tent on the path where I usually walk him. I took this picture from my door so you can see how close it was to our apartments.

When I got out on the path, I took another picture so you can see that only the fence separated the tent from my courtyard. I saw the lady that was in the tent later on that day. I've never seen her before but she was walking around in a 2 piece bathing suit. I haven't seen her or the tent since that day. Maybe she had an argument with her hubby and decided to go camping for the night. Who knows.
----

Of course the police ended up at my apartment complex this week. The ambulance was also here. I heard someone screaming at another person in one of my neighbors apartments. Next thing I know police are running in with their shotguns and the police helicopter is circling my complex and the lady was taken out on a stretcher.
---
So now for a little gossip.
I was taking the trash out and when I walked by the old shop door, I saw my married neighbor that I've told you about and his girlfriend inside there. He popped away from her so fast it was kinda comical. As as I coming back from putting the trash in the can, they were leaving the shop room. But the funniest thing was, she had a cordless drill and put two screws back in the door so it looked like no one had broken in there again. I mean, the lengths that these two are going to in order to find a place for a quickie is ridiculous. 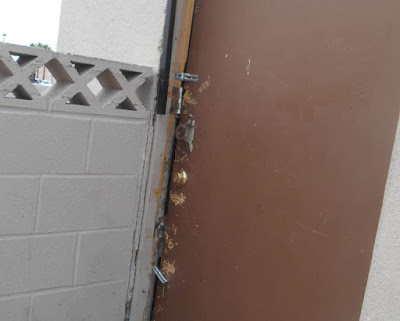 This is the old shop door so you can get a picture of what I'm talking about. It's been nailed shut, busted open. Screwed shut, busted open. And they are even using some kind of metal brackets now that cordless drill woman has no problem getting by.
A couple of days later we had apartment inspections and the maintenance people were all over the place with the apartment manager who I got to meet for the first time in more than a year. One of the maintenance people caught the married guy and his girlfriend inside the old shop and kicked them out. Then the maintenance guy proceeded to put more screws into the door to nail it shut. Not that's it's going to stop cordless drill woman, she comes prepared. I just hope the married guy comes just as prepared for their little interludes or he might get more than he bargained for ie...an STD. Because she's one of the homeless methheads around here. I wonder if the married guy will get a warning letter about breaking into the shop. Would serve him right if his wife saw the letter before he did. Karma my friend, is a bitch and she's coming for you.
So that's it for this week's Apartment Hell  Life! Be sure to come back next week for more.
A quick update for those of you that follow by email. Feedburner is getting rid of that so I just deleted it. I don't plan on replacing it with anything.
Posted by Mary Kirkland at 12:00 AM 52 comments