You Know It's Time To Leave A FB Group When...

I'm sad, aggravated and upset after learning that a woman I looked up to, that a lot of my fellow ratty lovers have looked up to admitted that she does surgery on her rats herself using Isoflurane as the anesthesia, which only a licensed vet is supposed to be using. Now this in itself is not the big deal..the big deal is she is not a veterinarian, has had no veterinarian schooling and sees nothing wrong in performing surgeries on her own rats as well as other people's rat when they bring them to her.

What really upset me and made my mind up to leave her group, The Rat Fan Club is the fact she said as long as the rat wasn't feeling any pain she saw nothing wrong with operating on a rat without pain meds. Now tell me, how can you tell if a rat is in pain? Just by them squeaking, moving ect..? Rats are hearty animals and hide their pain so this does not always show and anyone with as much experience as she says she has, would know that.

The last straw for me was when Debbie Ducommon (The Rat Lady) gave advice to a lady who had a rat with a broken leg and the advice she gave her was to let the broken leg heal on its own..with no pain meds. I'm appalled.. Subsequently, the next day the poor rat passed away. I'm not sure that would have been the outcome had the lady taken the rat to an emergency vet the night before.

Yes, we ratty parents can do minor cut care, minor health inspections and even administer medications to our rats but that's after seeing a certified veterinarian and finding out what medications and at what doses we should be giving them.

The problem I've found with the rat lady and her group is that if you question her abilities, what she's admitted to doing (ie..surgery on her own rats) the posts get deleted right away and you face getting banned just for questioning her methods.

I've even seen Debbie give people advise that goes against what their own vet has told them to do with regards to clearing up UTI's and URI's. She might have years of experience raising rats but she's NOT a trained veterinarian and I now consider a lot of what she's told others to do and what she does herself...to be unethical. Frankly, it's downright abusive to tell a rat owner to just let a rats broken leg 'heal on its own with no pain meds and no vet visit'

The bottom line is if your rat needs surgery to have a tumor removed, you take them to a licensed veterinarian...not someone who operates in her home under who knows what kind of conditions and doesn't have any schooling to do so. A person who thinks "I've seen surgeries performed so therefore I think I am qualified to do them now" is deluding herself if she thinks this is ok.

Just because you CAN do something, doesn't mean you SHOULD!

Here are screen shots of the conversation as proof... *If you can't read them, just click on them to make the pictures larger* 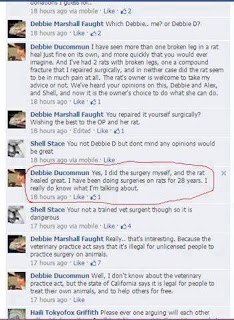 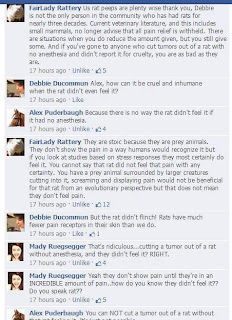 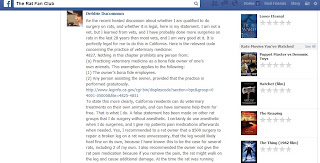 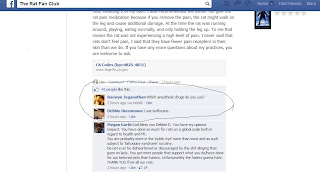 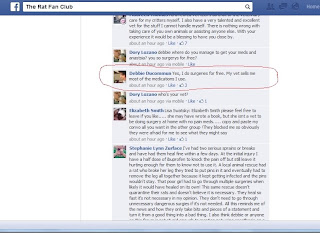 Now I don't know if it's legal for anyone to be getting anesthesia from their vet and using it at home for surgeries on their animals, but even with the more than 15 years of experience I have with small animals I would not do this without getting schooling for it. I don't understand how anyone would.

I've written many articles about small animal care and most of the things I've written about are things you learn by having rats, hamsters and other small animals that you pass along to people who are just starting out with those animals.

I don't care how many surgeries I have or haven't seen, just watching the surgery does not qualify you to perform them, it's ridiculous to think it does.

My last thought on this subject is if you are looking for a rat group to join on Facebook, try Rats Are Awesome or Network For All Rat Lovers... before you join Rat Fan Club.