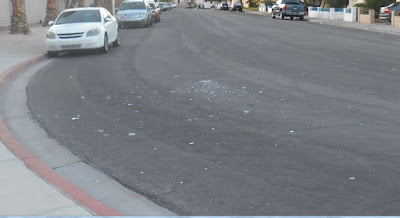 This week a woman and her boyfriend got into a huge fight out on the street. She somehow broke out her boyfriends driver side window which is why you can see glass all over the street right there. 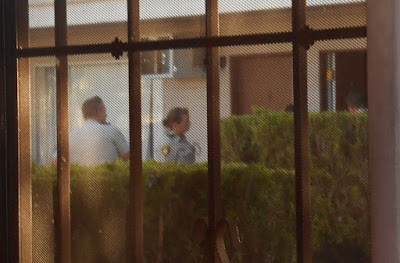 Less than an hour later the police showed up at her door and of course she lives in my courtyard. I took a picture of the police through my security door. She wasn't arrested but I haven't seen the boyfriend back for the past few days.

I've been a little absent this week because of a problem I've been having with the manager. Here's what happened.
I put the work order in Tuesday night for a broken AC. Wednesday morning when I called the manager to check on it she hadn't even seen it. She didn't send the maintenance guy out until Thursday morning and it was 90F all week and we had no living room AC, thankfully the bedroom AC still works. The maintenance guy took one look at it and said there's nothing wrong with it because it's still blowing cold air. But when we turn the unit off the compressor sounds like it's stuck and keeps running but no air is blowing. It shouldn't keep running when you power it off! The idiot maintenance man says just keep it plugged it and it will cycle through and keep blowing cold air. Are you out of your mind? The compressor is stuck! It will burn the unit up and start a fire.

So on Friday, the manager comes to my door and tells us that the maintenance guy said there was nothing wrong with the AC because it was blowing cold air. She said she can't order a new one for us because her boss hasn't given her the budget for any news ones. On October 6th the new owners take over this property and she isn't sure that her company is getting the contract to be the property managers of this place. So she and her bosses have put ALL maintenance on hold until after the 6th when they find out if they will be managing this place. She isn't even sure she will have this job after the 6th of next month so she flat out told us she isn't doing anything until she finds out. The management company is keeping whatever budget they have left over right now for themselves and not spending anything else on this place until they find out if they have the contract.

So Ken who is a certified AC technician... opened up the control panel, tightened some wires, cleaned off the terminals or something and plugged it back in Now it's working again...for now. I can only hope this bitch gets fired and we get a new manager that actually cares about the residents.