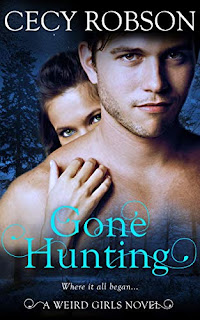 The rest of the werewolf pack might consider Aric Connor to be omniscient and destined to save the world when evil returns to claim it. But for the most part, fifteen-year-old Aric ignores the confirmations of his powers, taking everything in stride until he meets her.

Celia Wird wasn't supposed to awaken naked in the mountains of Colorado, not when she was just stalking her prey in a filthy alley several states away. She especially wasn't supposed to meet Aric, the handsome werewolf who comes to her aid.

As a supernatural tasked with protecting the earth, Aric sympathizes with Celia's dangerous situation. He's also struck by her beauty and kindness. Yet, as much as Aric welcomes Celia, her arrival isn't a peaceful one.

Dark forces stir in Celia's presence, resolute on killing her. Aric and his inner beast are adamant about keeping Celia safe and with them. But there's a time and a place for love, and Aric and Celia might not survive long enough to find it.

I won this book in an Amazon giveaway and I haven't read many of this authors books but I'd heard good things so I gave it a try.

Aric is the son of the Weres leader, they live in Colorado and while out hunting Aric finds Celia in the woods. He can tell she's different but doesn't know what she is at first. Celia is scared of him and his friends at first but that doesn't last long before she is feeling safer around them. But before they can really get to know one another something dangerous comes for them and almost kills a couple of them. Celia helps a couple of Aric's friends and that seems to help his friends trust her a bit more than they had when they first met.

Danger comes at all of them including Aric's family. They do what they can to try and stop it but even a powerful witch they know has a hard time fighting against the evil that is out to kill them and Celia. I loved how Celia and Aric get close to one another amid the danger because they are meant to be together.

Then out of nowhere a huge twist is thrown in and everything changes. I haven't read this series but I realized after reading this that Gone Hunting is a prequel in the Weird Girls series. So even if you haven't already been reading this series, this is a good place to start since we get to see this series unfold from the beginning.