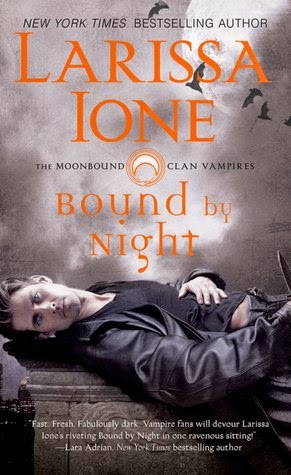 Nicole Martin was only eight years old when she narrowly survived a massacre: her family’s vampire slaves rebelled and killed everyone in her household. Twenty years later, Nicole now dedicates herself to finding a vaccine against vampirism…and eradicating the gruesome memories that give her nightmares.

Riker, a member of the wild vampire Moon Clan, is haunted by his own demons—his wife Lorraine had been captured and enslaved by the Martin family. It was during a botched escape attempt that she was killed, along with their unborn child. Still wracked with grief and anger, Riker is now fueled solely by the desire to rescue vampire slaves…and slaughter their owners.

When Riker stumbles upon Nicole in a chance meeting, he immediately recognizes her as a member of the Martin family that once enslaved his wife—and she recognizes him as the wild vampire she saw kissing a pregnant slave in the moments before her violent death—an image that has haunted her dreams for years.

When Riker kidnaps Nicole and they spend a night together in a cave on the way back to his clan, suddenly they begin to realize that they aren’t as different from one another as they may have thought—and they’re finding themselves drawn to one another…

My Review
I'm a huge fan of the Lords of Deliverance series so when I heard that there was a new series from that author I knew I had to read the first book.

When I first started reading this book, I wanted to hate Riker. I felt so bad for little Nicole and how her family just didn't understand that she felt bad that her nanny and the nannies unborn baby had died. To her family the vampires were just slaves but to little Nicole that nanny was her friend.

Now fast forward 20 years after Nicole's family is killed by the vampire servants and Nicole is working at Daedalus Corp to find a vaccine for vampirism. Riker kidnaps her, she comes to understand that most of what she thought she knew were lies and she finally learns the truth about what happened and what is going on at the place where she works.

This was an amazing start to what is looking like will be another great series. There's a lot more going on at the Daedalus Corp than Nicole even knows, but she's been kept int he dark about a lot of it as he weirdo half brother was in charge of the company until she came of age and takes over.

I felt bad for the vampires in this story. They are living in fear, some are slaves and if they are rounded up and taken to Daedalus, they are experimented on and sometimes defanged. But there are factions of vampires fighting back, much like a rebellion of humans would if they were the ones being rounded up, enslaved and experimented on by vampires.

The only problem I had with this story is how fast Nicole falls for Riker. She's been traumatized and hates/fears vampires but falls for Riker really fast for someone who acts and says she thinks they can't be trusted because they will turn on a human and killed them. After what she has seen and the fact that her family was wiped out by vampires, I found it hard to believe that she would fall for Riker so fast and believe what he and the other vampires were telling her to be the truth. But it wasn't at all one sided because after 20 years of detesting humans for good reason Riker suddenly falls for this human? After 20 years of celibacy he just can't help himself with a human?

Maybe if they'd had more time to get to know each other and they hadn't rushed into each others arms and bed so fast, it would have been more believable. I did really like this story and most of the world building that took place in this story but the love or lust between the main characters felt a bit rushed.

I'll definitely read the rest of the books in this series but I can only hope that the relationships aren't as rushed as this one was.