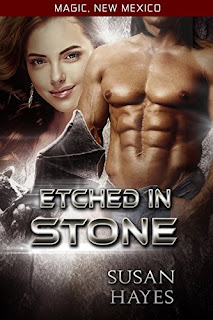 Book Description
Adina thought she bought a new statue for her collection. Fate sent her a soulmate instead.
Stone has been alive for centuries but he’s never truly lived. Created by magic, he was duty bound to watch over the Drummond family and guard them with his life. Now, his last master is dead and there’s no one left to protect. Instead of gaining his freedom, Stone finds himself locked in his granite form, a living mind trapped inside a statue. Lost in despair and on the verge of madness, the days blend together into one everlasting nightmare...until he begins to dream of her.
Adina Diggersby lives for her art. Sculpting stone is her passion, one that keeps her busy enough she rarely has time to mourn the one thing missing from her life, someone to share it with. The last thing she ever expected was for her newest purchase to come to life and inform her he was her new protector.
Adina won’t rest until Stone is free of the spells that enslave him, but unraveling the dark magic that created him will come at a price. Are these two souls doomed to be forever alone, or is their love strong enough to be etched in stone?
My Review
When Stone's master died, he was trapped in his stone state and wasn't sure he would ever be released. he started to go crazy and then the dreams came. Stone is a gargoyle cursed to be a guardian to the Drummand family and after many years, he thought he would finally be free when the last family member died, but that's not what happened.
Adina wanted the stone gargoyle she saw up for auction online and when she won the auction she had no idea that her life was about to change for the better.
When the stone gargoyle is delivered to Adina's studio, she is so taken with the statue that she runs her hands all over it, not knowing that there is a very real, very alive being locked inside. But soon enough Stone is released from his stone prison and is standing before her in all of his gargoyle glory. Adina is shocked but not as shocked as much as I would have been. But there's a good reason for that, she lives in Magic, New Mexico where all sorts of magical creatures live. After coming to his senses, Stone assures Adina he means her no harm and then tells her his story. When he transforms into a gorgeous human man, she's even more shocked because they've been having dreams about each other.
After realizing that Stone has been a prisoner, a slave to the Drummand family, Adina sets out to free him so he can make his own choices but that's easier said than done. She enlists a witch's help and they think they can free him but when someone attached to his last family comes looking for the statue, both Adina and Stone have to fight again for his freedom
Stone is awesome! Gosh, I just loved him so much. He's fierce, gentle, romantic and very loyal. Adina is perfect for him and I found myself jealous of a fictional character. This was such a fun story.
I give this book 4 out of 5 stars.
Amazon
Posted by Mary Kirkland at 12:00 AM 18 comments