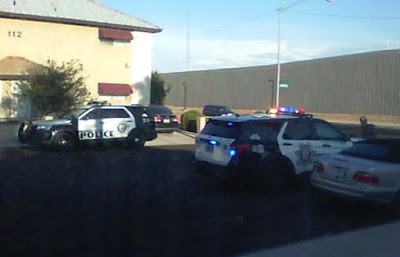 The police were on my street and had someone from drug dealer's apartment at the front of their car. I waited to see if he was going to be arrested but he wasn't. They let him go after questioning and running his name I presume. As the police were leaving he was yelling, "You know you did me wrong!"
----
He's baaack. Drug dealer is out of jail and the druggies are right back in his place again. All hours of the day and night *I have not been able to get a picture of him yet for those who are waiting*  In the  morning he has his motorcycle in the courtyard and was revving the hell out of it. It was loud as hell.
On Monday I was walking Falcor and one of the homeless people was out on the path were I walk and was pacing back and forth, yelling and screaming to himself about how he was sleeping in front of some lady's apartment across the street that morning and she woke him up and told him to leave because he was scaring her kids. He started talking to me and said, she scared her own kids, effing ugly heifer. lol
He asked me if I've seen him cleaning up after some of the other homeless people, and how he picks up the used needles and other stuff and I said yes, because I have. He says, I've paid my dues around here, that heifer should have let me just sleep. I wasn't going to say anything because he was so upset and you just never know about people.
Then he said my maintenance man told him he had to leave because he didn't live here and said maintenance man walks over to the big trash can and he starts yelling at him again. So I walked away as they were yelling at each other. As I'm walking back into my courtyard drug dealers says to me, "You see what I have to deal with?" I asked, "What do you mean?"
He says, "He's mad at me because I won't let him in because he wasn't respectful to me." I said, "He's not mad at you, he's mad because some woman across the street wouldn't let him sleep in front of her door this morning. But if you didn't let those people into your apartment, you wouldn't have problems like that."
He had the nerve to tell me that he doesn't let anyone into his apartment.  So I said, "Yeah you do. There are people coming and going from your apartment all day and night for the past few years. Everyone around here knows what goes on in your apartment."
He says, "It's not like that. You don't understand."
I said, "I understand that you have all these homeless people and drug addicts coming and going from your apartment all hours of the day and night. "
He's like, "I was in jail, I had no control over who was in my apartment for the last month."
I said, "I know, several of your neighbors called the police trying to get all the people out of your apartment while you were in jail and Theresa was in the hospital. But the police wouldn't do anything because you had let all those people in your place before you were ever gone."
He says, "I don't let anyone in my apartment, and they pillaged all through my things and I'm not the only one who lives there." So now he was trying to blame it all on his wife.
I said, "I am up all hours of the day and night with this dog because of his sensitive stomach and I see people coming at going from your door at 3, 4, 5 AM all the time. And I see you letting them in, they stay for a few seconds and they leave. I'm not stupid, no one around here is and everyone knows what's going on in your apartment.  I could go on a month long trip to the Bahamas and no one would go in my apartment because I don't let anyone in to begin with.
He yelled at me and said, "You don't talk to no one around here!"
I said, "Exactly."
He said, "I'm just not going to get anywhere with you."
I just said, "Nope." And I walked to my apartment.
More was said but I don't remember everything we said to each other. This is the first time I've said more than hello to drug dealer but I was done with his BS and was in a bad mood that day.
---
So other than that and my neighbor telling me I need to date again and I need a man in my life, and trying to fix me up with my 70 year old neighbor...it was a fairly quiet week. lol
The high this week was 100F/37C
The low this week was 78F/25C
So that's it for this week's Apartment Hell  Life! Be sure to come back next week for more.
Posted by Mary Kirkland at 12:00 AM 45 comments