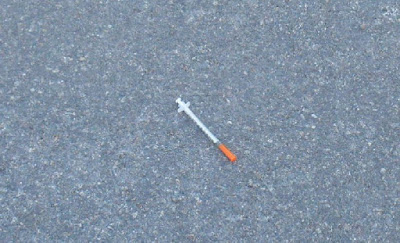 On Tuesday I was walking Falcor and spotted this used syringe on the sidewalk. I used a piece of paper to pick it up and throw it in the garbage. Don't need the little kids around here getting a hold of something like this.

Then on Thursday I was out walking Falcor and looked in the rocks that my apartment complex has instead of grass and spotted something. You probably don't see it... 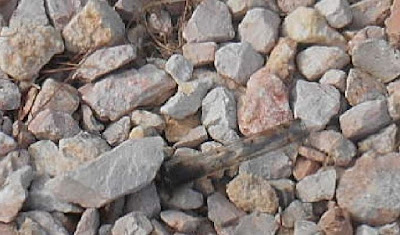 This is what I saw in the rocks...a crack pipe. And again, I carefully put it in the trash. I don't care if people want to do drugs, that's on them but don't leave your paraphernalia just laying about for kids to find. 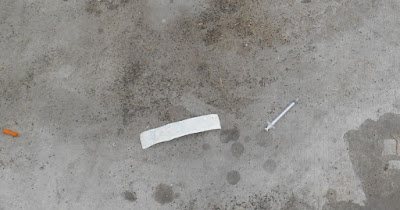 And the hits just kept coming this week! On Friday I started seeing the orange tops from the needles, all over the ground so I started keeping an eye out because I had a feeling there would be more dirty needles laying around and I was right. To the left of the syringe there's the orange top to the needle. They couldn't even be bothered to put the cap back on and throw the needle away in the trash can that wasn't 15 feet away. 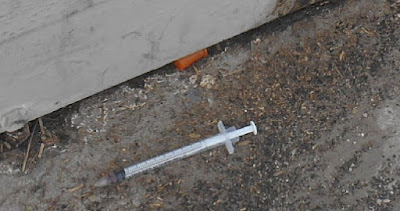 A few minutes later I spotted yet another used needle and orange cap about 20 feet from the last one. It pisses me off that these idiots won't even put the cap back on the used syringe. There are lots of kids around here and people walking their dogs. All of these needles are in the places that the homeless people around here usually gather or sleep. There are trash cans near here and so I picked them all up and disposed of them. It's beginning to be a real problem around here as you can see. I'm sure I'm not the only one walking their dog and putting these things in the trash.
So that's it for this week's Apartment Hell  Life! Be sure to come back next week for more.
Posted by Mary Kirkland at 12:00 AM 63 comments