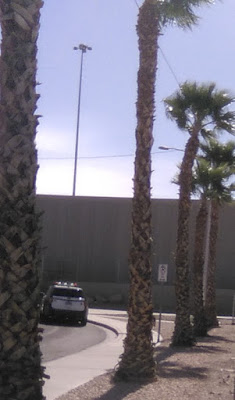 My loud neighbor who plays the porn, slams his door and yells all day had his sister come to his place this week. My daughter and another neighbor were sitting outside and she came to talk to them and let them know she was sorry for all the noise he's making that he has mental problems and he stopped taking his meds. But that so many people have complained that the apartment manager is trying to evict him. While she was at his place, she made him take his medication and he called the police on her. They got into a big fight and she called the police on him. So the police came but didn't stay long. 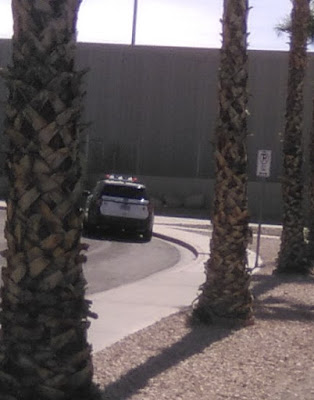 I enlarged the picture so you can see the police car. I kept the original picture because with that huge sound wall, it makes me feel like I'm in prison surrounded by a high wall. lol The palm tree's are pretty though.
The high this week was 72F/22C
The low this week was 38F/3C
So that's it for this week's Apartment Hell  Life! Be sure to come back next week for more.
Posted by Mary Kirkland at 12:00 AM 44 comments