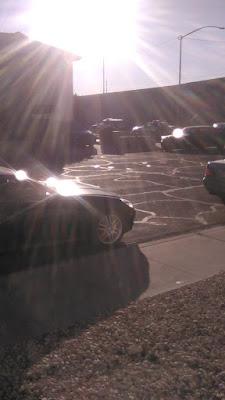 Wednesday morning the police were at the corner apartment building again. There were a bunch of people who didn't live there standing around and hanging out by the apartment doors. I don't know if someone there keeps calling the police or what. 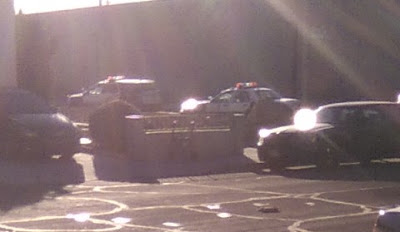 I enlarged the picture so you can see the two police cars that were over there.
----- 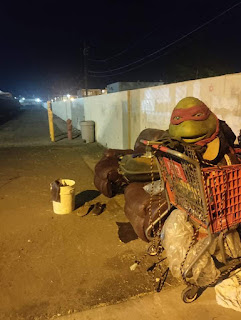 This week my daughter noticed something I hadn't over by where a couple of the homeless guys have been sleeping. One of them has a Ninja Turtle in his shopping cart. That's a couple of chairs behind it. 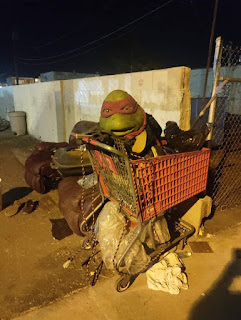 My daughter was walking by and said it looked like the Ninja Turtle was watching her so she took a picture. 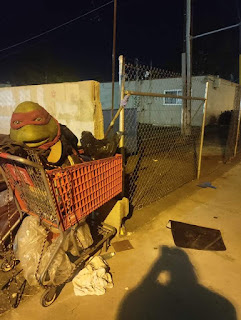 It does look like it's keeping an eye on her. lol
-----
Wednesday night I was walking Falcor and he barked at some woman who walked by me. I had him on a short leash and he never got close to her. she walked around the building just so she could walk by me again and walk really close to me. She slowed down so she could scream right in my ear, "Restrain your damn dog" To which I replied, "I did."
I kept walking but had my hand on my taser because when I turned around she was just standing there staring at me. I didn't know if she was going to come hit me or what. But she was mad. Like, really mad that my dog barked at her.
-----

If you read my Sunday post last week you know what a complete idiot the maintenance man is. Monday I put in a work order online for my clogged kitchen sink, he never showed up that day to fix it. So Tuesday morning I look to see if anything has updated about the work order and this motherfarker has updated the work order that he completed the work on Monday when I submitted it.
So I put in another work order and you can see what I said there. I said he never came out, my sink is still clogged and I would hope maintenance would actually come out and do the work today.
I took a screen shot of the work order just in case he tries to change the date or anything. Try and pull a fast one on me. Think again. They never came out to fix it all week. I sent two emails to the manager and no response. I finally got fed up on Friday and called the emergency maintenance number and talked with an actual person. I explained the situation and she sent out 2 different maintenance guys who did finally fix my drain and I didn't have to deal with the idiot maintenance guy from last week.
----
Monday night the police were down at the end apartment in my building but they only stay for a few minutes. No idea why. He has the homeless brother so maybe they were looking for him.
Then late Monday night we heard a bunch of gunshots really close. A few minutes later the police showed up and were shining their flashlights on the ground 2 doors down in the rocks, I am assuming looking for bullet casings (spent shells). They were out there for quite a while but I don't know if they found anything.
----
When I took falcor outside Thursday night, there were three big pitbulls off-leash walking around and one of them aggressively came up to Falcor. I saw the owner standing outside and I yelled at her to get her damn dog but she didn't even move. She did nothing to call her dog back. Thankfully I had my Taser with me set it off in the air for a few seconds that was enough to scare the dog away.  Friday morning I called Animal Control to make a complaint and emailed the apartment manager letting them know that they have three big pitbulls in their apartment what they've already been told that they have to get rid of because no dogs over 25 pounds are allowed in this apartment complex. I warned her twice before when this happened and I told her the next time it happened that I would be calling animal control and making a complaint so she's been warned. This really pissed me off I'm glad I didn't have to tase the dog though, the sound was enough scare the dog away which is why I got the taser in the first place so I'm glad it worked.
The high this week was 73F/22C
The low this week was 42F/5 C
So that's it for this week's Apartment Hell  Life! Be sure to come back next week for more
Posted by Mary Kirkland at 12:00 AM 59 comments