Book Review: Mine To Take by Cynthia Eden 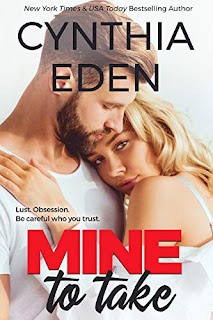 Book Descriptions
Skye Sullivan knows that someone is watching her. Not just watching--stalking her. Months ago, Skye was involved in a dangerous car accident. The accident ended her dancing career and sent her fleeing back to Chicago. Skye is convinced that her stalker caused the crash, and she fears that he won't stop pursuing her, not until she's dead.
When someone breaks into her apartment in Chicago, Skye turns to the one man she believes can protect her--Trace Weston. Once, Trace was her lover. Two lost souls, they'd come together in a firestorm of need and desire. But then Trace had pushed her away. He'd joined the military, vanishing from her life. She'd put all of her emotion into dancing, and she'd tried to forget him.
Now Trace is one of the most successful men in the United States. Rich, driven, and carrying dark secrets, he agrees to help Skye. He'll protect her from the danger that lurks in the darkness, but Trace wants more than to just be a guard for Skye.
He wants her. And he'll take her. The years have changed him, hardened him. He's not just a poor kid from the streets any longer. Now, he can have anything--or anyone--that he wants. And the one woman he has always wanted has just come back into his life. He won't let her go again.
But with the threats mounting against Skye, she suspects that her stalker may be intimately close. He's a man who knows her too well. As his attacks grow ever more dangerous, she realizes that if she trusts the wrong man, she could be making a fatal mistake.
Lust. Love. Obsession.
Just how far would you go in order to possess the one person you want the most?
My Review
Skye and Trace knew each other since they were kids and they loved each other but Trace sent her away to live her dream as a dancer. Since then he's made a name for himself and a lot of money in the process. But Trace kept an eye on Skye as she made her dreams as a dancer come true and then later when the accident she was in killed her dreams. Trace wanted to go to her but instead he waited to see if she would ever make her way back into his life, so when she comes to his office to ask for his help with a stalker, he's thrilled and shocked.
Someone has been breaking into Skye's place and messing with her belongings, just a little. Not enough to actually make the police believe that someone is stalking her. So when she goes to Trace, she's not sure what to expect or if he'll send her away again. But he believes her, sets out to change her locks, keep her safe and check out all the people in her life even if the police have no leads and aren't really sure if there really is a stalker.
I had no idea who the stalker was until he was revealed because everyone Trace interviewed had a good alibi or sounded truthful. It was interesting to see who it was and why they were stalking her. I really liked how possessive Trace was of Skye and how safe she felt with him even though he'd done some not so legal things in the past. Watching them get closer and find the love they thought had been lost all these years was swoon worthy. Trace is a great guy and this was a great story.
I give this book 5 out of 5 stars.
Amazon
Posted by Mary Kirkland at 12:00 AM 34 comments