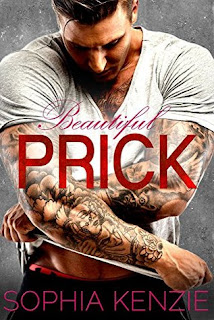 I’m a production assistant for a major movie studio, and I happen to be damn good at my job. So how the hell did I end up as his personal assistant?

Johnny Braylock—even his name makes him sound like a total prick.

He thinks his chiseled abs, massively broad shoulders, rock-hard biceps, and movie star smile can get him whatever he wants…and rumor has it, the tool he’s packing in his pants gets him any girl he wants.

I used to have the biggest crush on him. It was an embarrassing crush. It was one of those crushes where I had a giant poster of him in my bedroom, and I used to tell my mother that one day I would marry him…

That’s before I actually met the 6’1’’ two-hundred pound Welsh God face to face. That’s before he opened his mouth and revealed his true "alpha male", cocky, asshole self. Apparently, because he’s an ex-marine, a gorgeous movie star, and an MMA fighter means I’m supposed to worship the ground he walks on.

Despite being my teenage movie star crush, the man drives me absolutely, positively nuts. I hate him. It’s quite possible that I hate him more than I’ve hated anyone in my entire life. I hate him twenty-three hours of the day.

It’s that freaking twenty-fourth hour that gets me every time. Why the hell is he so beautiful? Why is his accent so sexy? Why do his insults simultaneously sting and make my body react in unspeakable ways?

Caroline meets up with her teenage crush, Johnny Braylock while she's a production assistant. She's excited to have met him until she's informed she's now his personal assistant and he immediately starts treating her differently. I hated this guy right from the very beginning. I almost put this book down and stopped reading it when he tricked her into going out to a bar with him and then proceeded to watch her get drunk while unbeknownst to her, he wasn't drinking alcohol at all. She ends up getting herself mugged because of this and I totally blamed him for that. I didn't like him but I was hoping that somehow if I kept reading this book, my feelings would change but they didn't and I ended up not liking this book all that much because of him.

In order to cope with what happened to her, she asks Johnny to help her learn to fight so she'll be able to protect herself if anything like that ever happens again. Since he's an MMA fighter he teaches her how to fight like that and after a few lessons she thinks she knows enough to fight other people and maybe even confront the 5 guys who mugged her. This story line just bothered me because it didn't make sense. Who thinks like this? Caroline didn't really seem like an idiot, she's smart. Smart enough to be a production assistant and now personal assistant but her street smarts aren't smart at all and that was part of the problem in this story for me.

Johnny and Caroline are sexually attracted to each other but I felt no emotional connection between these two at all. He's hot and he knows it and his personality is that of a big good looking jerk. I know you've probably seen or met a few of those and his personality just totally threw this book in the trash can for me. The other thing that bothered me about this story is that Caroline talks about his Welsh accent quite a few times, but is the dialogue of the book you can't tell he has an accent at all.

In most books where one of the characters has an accent, you can read it in the dialogue. For instance a man with a Scottish accent may say things like, "Aye, Lass." or "Ach, dinna fash yerself." And other characters with accents would say other things and maybe even say some words in their native language. But I didn't see anything that would lead me to believe that Johnny had an accent other than the fact that Caroline kept saying he did and his sister did. I only finished it because I was hoping it would get better but for me the story just made no sense and I didn't care for it. It had potential but fell short for me.