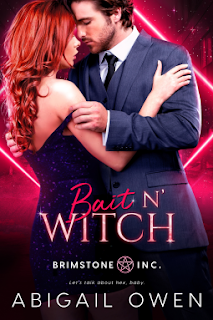 Rowan McAuliffe has been hiding most of her life. Secretly trained in her powers by an unusual source, she'd been taught not to trust anyone. Especially other witches. However, after she was forced to perform a hateful act against her will, she now hides from the Covens Syndicate and their judgement.

Greyson Masters is the Syndicate's best hunter. On top of the danger of his job, Greyson is trying to raise his triplet daughters alone, budding new witches who display an alarming combined power no one understands. Too bad he doesn’t have a clue how to deal with them.

Until Rowan walks in and the chaos settles for the first time in...well, ever.

Little does Greyson realize that his new nanny is the very witch he is hunting, and she’s been hiding right under his nose this whole time.

Rowan is hiding from everyone when her friend sends her to be a nanny for the man who is hunting for her.

Greyson has been hunting for a witch that helped a bad guy but he's had very little luck in finding her.

Rowan is hoping that her new job as a nanny for Greyson will help slow down his progress in finding her. At first that's really all she cares about but the more she gets to know him and his three girls, the more she wants more with him.

Greyson has had a hard time keeping nannies for his three girls who happen to be witches because they can be a handful. Rowan is really good with the girls though and he's glad about that since he has an important job that keeps him away from home for long periods of time.The girls seem to be unique too which is interesting.

When Rowan realizes that danger is headed her way she does what she can to protect Greyson and his girls but things don't always work out the way you hope they will. When danger ends up right at their door, Rowan can no longer hide and Greyson finds out that she's more than he thought she was. But with the help of her friends, she might be able to get out of this alive.

Greyson and Rowan are great together even thought he doesn't know everything about her and when he does find out who and what she really is, I had to read faster just to make sure that he wasn't going to throw away everything they could possibly have together. This book sure kept me on my toes for a while but the ending was great. This series has been great so far. I'm looking forward to the next book now.

Disclosure: I was given an ARC of this book via NetGalley but all thoughts and opinions are my own.
Posted by Mary Kirkland at 12:00 AM 28 comments