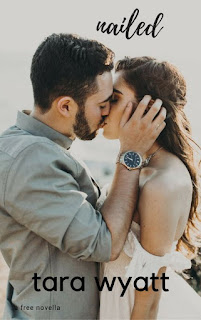 I saw on the authors website that this novella was a free if you signed up for her newsletter so I signed up and read it. These two meet back up after leaving on bad terms. Adam's friend backs into his neighbor's fence and deck and he calls Adam to come fix it for him.

When he shows up at the neighbor's house he's shocked to find Charlie standing there. Charlie and he had met on a dating site, they'd hit it off right away and after talking for a while they agreed to meet at a bakery...only he never showed up. He was just getting over a divorce and panicked when he was faced with meeting her in person. He stood her up and it really hurt Charlie because not only had he not showed up, but he didn't return any of her messages and went so far as to delete his profile from the dating site. She'd never heard from him again but there he stood at her front door.

So when he tells her that he's there to fix her deck, she tells him to leave. He comes back the next day and they talk a little more. She finally decides to let him fix her deck and they get close again. From then on I really liked how they got along, getting to know one another again. It was obvious that they had strong feelings for one another and acted on it. This was a sweet romance after moving past the hurt that happened.

I received this novella free after signing up for this authors newsletter.