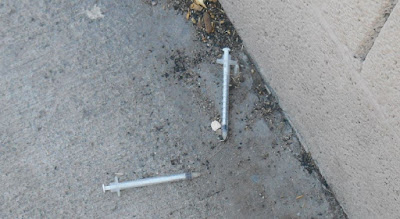 For some reason I was seeing and finding needles everywhere this week. There was a large population of homeless people in these areas this week so that's probably why. Plus I was seeing a lot more people by drug dealers apartment this week as well. The wall that these first two needles were was right by the wall that separates my complex from the parking lot of the store next door. But right on the other side of this wall is a garbage can. Good grief. 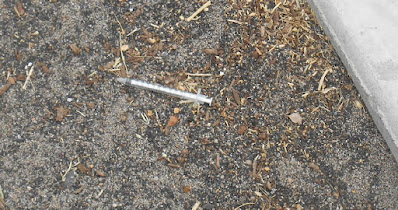 I spotted this needle by the hiking trail that I walk Falcor. 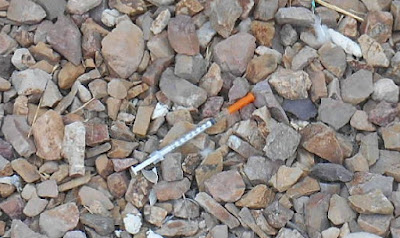 And this needle was further down the hiking trail where I walk Falcor. I found a plastic bag to pick them all up and put them in the garbage can. I just think it's ridiculous that they leave their needles laying around like this.
----
Saturday morning around 3am, my daughter was sitting outside our door in one of our chairs and herd gunshots close by. She wasn't sure where they were coming from until a couple of people started running by the side of the apartment building from the alley and then she heard a couple more gunshots. She quickly came back inside and said a few minutes later she heard the police sirens out there as well. I have no idea if anyone got shot in the alley but I didn't see any blood out there when I walked Falcor later that morning.
So that's it for this week's Apartment Hell  Life! Be sure to come back next week for more.
Posted by Mary Kirkland at 12:00 AM 47 comments