Yesterday I noticed these two police cars at the end of my street. That's where I usually take Falcor for a walk. The police were yelling at everyone to go back inside. Then I noticed that the other end of my street was also blocked off and the police helicopter was flying over head. 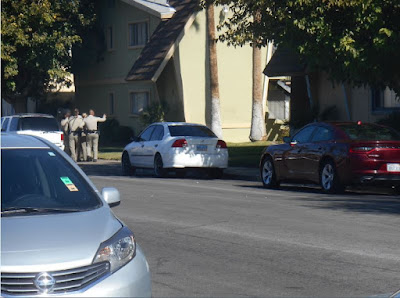 So down towards the other end of my street I noticed several police officers behind a shield, pointing their guns into the courtyard across the street. This is what it looked like from where I was standing at my apartment building without zooming in on my camera. 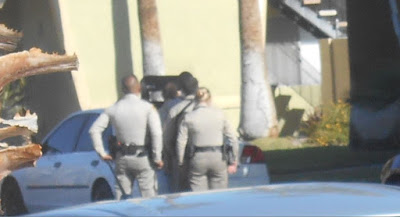 These next pictures I zoomed in with my camera so I could see what they were doing. A lady across the street said that she heard gunshots earlier and called the police. When the police got here they chased the armed man into one of the apartments across the street. 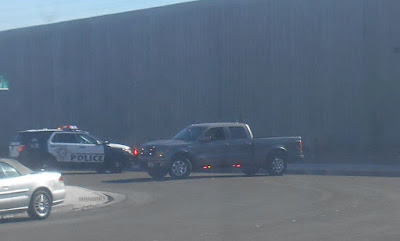 They blocked off both ends of the street. 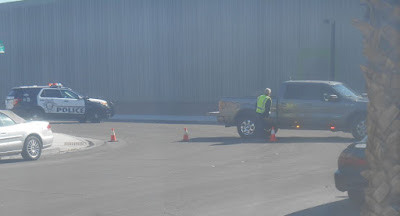 The police stayed on my street for 5 hours. Another officer was in the courtyard across the street with a bullhorn and was trying to get the armed guy to come out of his apartment. 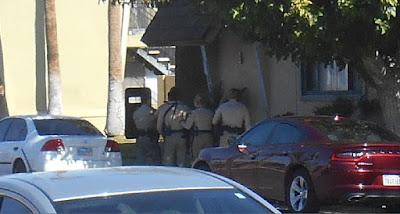 At one point the officers lined up and slowly made their way to one of the cars to clear it. No one was inside the car so they came back to where they had been standing. 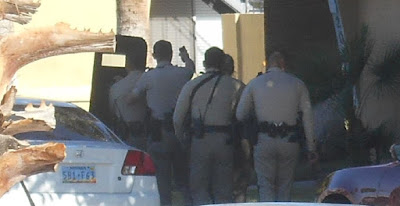 When I zoomed in I saw that they all had their guns drawn and were walking behind the guy holding the shield. 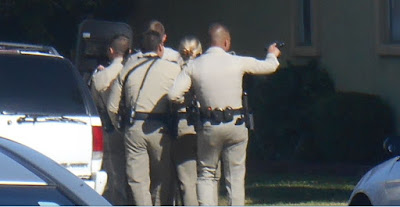 They were yelling at anyone who came out to look to go back into their apartments. I was far enough away that they didn't say anything to me at first but then people including myself started taking pictures and they didn't like that so they told everyone to go back inside. Ken kept going back out and kept being chased back in. One time the cop actually ran across the street and Ken came running back in the apartment.

At one point that entire building was evacuated except for one lady who was directly below the apartment he was in. 8 police officers with shields went to the downstairs apartment and safely got the woman out of her apartment. Then they evacuated the building on my side of the street directly across from them where all the people kept coming out to watch them. And the police chased everyone including myself back into our apartments. So all of these next pictures were taken from inside my bedroom window. 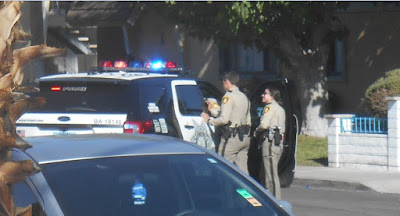 More police showed up and blocked the street. Swat showed up and parked somewhere on another street that I couldn't see. Ken said he saw 2 Swat snipers on our apartment managers roof, pointing their rifles across the street. 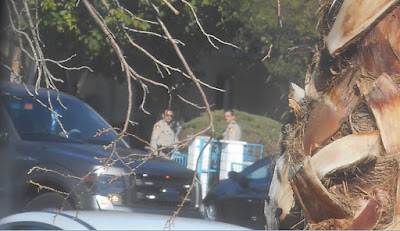 While the 2 cops were chasing people back in their apartments across the street. The cop that you can only see a shadow of on the left here was waving at me to get out of my bedroom window. Yeah, like that's gonna happen. Dude, I'm half way down the street, 3 courtyards away from where it's going on. You can't chase my ass out of my own window. I'm inside my apartment so you can kiss my ass. I just stayed there taking pictures and he walked away. 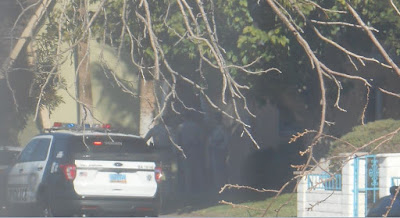 You can barely see see the police right next to the car there up against the wall but that's where they stayed for over an hour.

I went outside real fast when the SWAT truck pulled up on my street so I could get a picture of the truck. Then hightailed it back into my apartment before the cops saw me outside again because they started threatening to handcuff people if they didn't stay inside. I'm half a block away and they still kept telling all of us to get back in our apartments. It's not like the guy could shoot at us because there was another building between us and him. So the police just didn't want us out there watching and taking pictures.

They stood around outside for hours before the armed man finally came out of his apartment and was arrested. He came out after Swat used a really loud flash bang that made a loud boom. Then half of the police left and the other half stayed around for another hour before everyone left.

Quite the exciting day we had yesterday.