This week I'm sharing something about a neighbor I had 3 years ago. He moved out soon after this picture was taken. 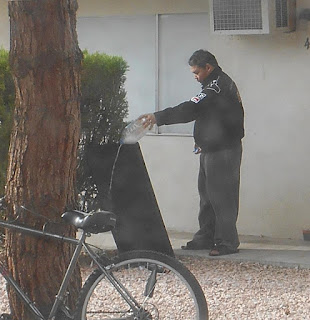 This is one of my a$$hole neighbors who lived right across from me. He kept his pitbull puppy in a crate (metal cage) most of the time and once a day he would bring the liner pan outside to 'rinse off'. But he rinsed the poo and urine off right there in front of the tree or bush that is in the middle of our courtyard so the entire courtyard smelled. The manager had been informed and even saw the mess and decided to do nothing about it. The smell was so bad that we kept our door closed even on nice days. Thankfully the grounds keeping/cleaning service that got hired soon after this cleaned up the mess that was left behind and after it rained really hard one day the smell also went away.

Thankfully he ended up selling this dog to one of the other neighbors right before he moved out and that neighbor didn't keep the dog in a crate. The new owner must have also taken the time to train the dog because he did what he was told and was very well behaved the times I saw him out before they too moved out.