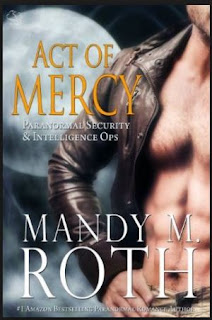 Paranormal Security and Intelligence Operative Duke Marlow has a new mission: find, interrogate and possibly eliminate the target - Mercy Deluca. He knows looks can be deceiving, but it's hard to believe the beautifully quirky woman running around in a superhero t-shirt is a viable threat. The sexy little biomedical engineer quickly proves she is more than he bargained for and Intel has it all wrong - she's not the enemy. Far from it. Intel also forgot to mention one vital piece of information - she's Duke's mate. This immortal alpha werewolf doesn't take kindly to her being in danger.

When Mercy accepted a position within Donavon Dynamics Corporation, she thought it was to help cure disease and to make a difference for mankind. She had no idea what her new career path truly entailed - monsters masquerading under the guise of scientific research. Unable to stomach the atrocities she's uncovered, she reaches out through what she hopes is the proper channels, asking for help. Mercy gets more than she bargained for when a team of paranormal hotties show up on her doorstep ready to take down the Corporation. One in particular is able to get under her skin, both aggravating and exciting her in ways she can't explain.

I haven't read this author before so I snagged this when it was a freebie because the story premise sounded really good.

Duke works for the Paranormal Security and Intelligence Operative Teams (PSI-Op), he is also a werewolf shifter. After a series of weird phone calls, Duke's team is sent to rescue one of their own.

Mercy is working for a corporation who she thought at first was trying to do good. It was only later that she figured out what they were really doing and none of it was good. In fact it was really bad, but she thought she was in too deep to just up and quit. She was trying to help the test subjects escape and after making several phone calls to the number she was given by one of the test subjects she wasn't sure if help was on the way or not.

I was thinking that this book would be full of action, gore, killing and a little romance. I wasn't wrong but it had so much more because when Duke's team got to where Mercy lived and tried to figure out if she was one of the bad guys or not,  not only did all hell break loose but it got funny. Mercy is hilarious and when she's in shock, she's even funnier. The fact that she's uber smart and makes jokes that go right over Duke's head and that of his team mates, makes it all the more hilarious. I haven't laughed that hard in while and that was only about half way through the book. It got even better from there.

Duke and Mercy were made for each other and they really fit together well. I really liked that as soon as they saw each other, his wolf just knew that she was his and subconsciously she knew the perfect man for her. I really liked that there's more to her than she realizes and that she gets to use that to their advantage. This was a great book and I am really looking forward to getting to know Duke's team mates because they are funny and great characters.