Using PTSD As An Excuse For Psychotic Behavior

In order for my readers to get a sense of what is going on, please click on the link, read the article, look at the mug shot at the bottom of the article and then continue reading this blog post. Thank you.

That my friends... is one of my brothers.

After he did this my younger brother and I decided to stop talking to him but he just won't let it go. I went 6 months and did not speak to him and even wrote a blog post you might remember entitled, An Open Letter To My Stalker. It was for him because he was stalking me around the internet and sending me friend requests at different places like Google+ and later Huffington Post. I deleted some of my accounts just so I didn't have to deal with him and I warned him if he didn't leave my younger brother and I alone, I would make all of this public and let everyone know what he did.

It's all public record, all you have to do is Google his name and all the articles pop up. He is facing serious prison time for all of that and rightly so.

So I want to set the record straight because he has started harassing my younger brother once again when he heard he was accused of sending an email to someone.

This is what happened...

I received an email the other day with the subject "Mary Mary quite contrary
The body of the email said... How does your garden grow...BITCH!"

Now I didn't recognize the email address, it wasn't someone that I knew. But they knew my name and they called me a name so I replied to the email thinking I might find out who sent it. But it bounced back as undeliverable. So I am assuming it was a disposable email address and once the person used it they discarded it so it can't be traced back to them. I told my younger brother that it sounded like something our older brother would do, but I didn't know for sure and that's when my younger brother posted something on his own fb wall about how he is sick of his brother causing trouble.

So our older brother sends him an email telling him he doesn't like his status update and to take it down. Well of course that didn't sit well with my younger brother and he told him he'll post whatever he wants on his own wall and there's nothing he can do about it and has no say.

My problem with this is Older brother was warned to leave us all alone. So what that younger brother posted something on his own wall...it's his right. Older brother seems to have just been waiting around for him to do something so he could cause more drama. Just one more reason I have nothing to do with him.

But, can't say I didn't warn him I would make what he did public if he messed with my family again.

The real tragedy is that about 10 years ago I went out of my way to find my older brother who had been given up for adoption before I was born. I found him, let him into my life for 8 years only to slowly find out that he is a lying, alcoholic, pot smoking, narcissistic psycho. I learned the hard way to be careful who I let in my life. Learn a lesson from me...you do not have to allow psychotic people into your life just because they claim to be family. Real family members don't treat each other the way he has treated us. 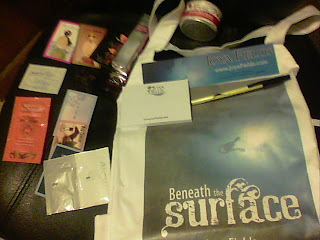 This week I received quite a bit of stuff. I got a can of Beneful dog food and a sample size tube of StriVectin face cream. I found links to both of those samples of Freebie Shark.

So what did you get this week?
Posted by Mary Kirkland at 1:00 AM 2 comments