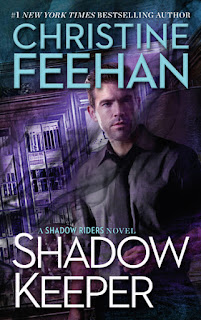 The paparazzi can't get enough of infamous bad boy Giovanni Ferraro. But unknown to them--and the women he beds--he's just playing a role. Keeping the spotlight on himself keeps it off the family business. And if this lethal shadow rider can't hunt in the dark, he'll find his pleasure elsewhere...

Sasha Provis grew up on a Wyoming ranch and thought she knew how to protect herself from predators. But in the nightclub where she works, she's fair game--until one of the owners steps in to protect her. Giovanni is gorgeous. He's dangerous. And his every touch takes her breath away.

The devil at her heels may have finally met its match.

I loved the first two books in this series and was eagerly awaiting this book. The family is interesting and their unique abilities are not something that I've seen in other books before.

Giovanni Ferraro as well as his family are rich and women fell all over themselves to try and get with them. But they were taught from a young age not to make the mistake of getting attached unless they found their match and when they found that person they would know it.

Sasha works as a waitress in one of the clubs that the Ferraro family owns. When Giovanno and his family come to the club and he spots Sasha, he's instantly intrigued by her. He saves her from being harassed by drunk patrons and ultimately leads her out of the club later on. I really liked watching these two get to know each other better. Giovanni isn't the snobby playboy that everyone thinks he is and that's a shocking realization to Sasha. But she was still hesitant to actually date him even though she was attracted to him. When he finds her, he just knows that she is his partner, his mate and all he has to do is make her see it too. Because of their special shadow riding ability they know when they find the one person in the world for them. Their shadow will touch the other persons shadow and they will feel it. So it's really no wonder that these two got along really fast or fell in bed together rather fast. Not that I'm complaining since the sex scenes are hot!

Sasha has had a bad few years recently. She had a tragedy and is now trying to pay for her brother's medical needs all by herself. But when a stalker starts invading her space, moving her things around and leaving notes for her, Giovanni and his family step up to keep her safe until the stalker is found.

I was a little let down that there wasn't more shadow riding in this book. There was a little off book shadow riding when Giovanni's family would show up really fast and the reader knows they got there by riding the shadows and there was some shadow tubes touching going on but not a lot of actual shadow riding. Anyone who has been reading this series understands what that is and how interesting it is in the books. I was kind of looking forward to seeing more shadow riding though but the story was really good. I liked the mystery of who the stalker was and it kept me guessing because I never saw that twist coming. I highly recommend this series and plan on reading any books that come out in it.