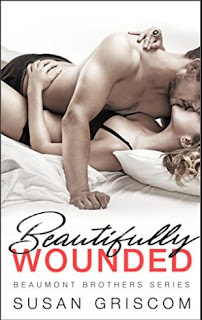 Sometimes the only way to salvation... is to take a leap of faith.

Jackson Beaumont prides himself on being a nature-loving, guitar-strumming, carefree sort of guy. When the mysterious Lena Benton walks into his bar looking scared and defeated, it's not something he can ignore. He's immediately consumed by concern for her and driven by his desire to help. She's just so beautiful. So wounded.

After being shuffled from one foster home to another growing up, Lena Benton dreamt of finding her prince charming. When the captivating Troy Harington sweeps her off her feet shortly after high school graduation, she's certain she's found her happiness. Unfortunately, Troy's true colors surface shortly after their marriage and things turn ugly. Lena only has one choice. She has to leave him. She has to run...

Lena's escape has brought her to Jackson, and he clearly wants to be there for her, but can she trust anyone again after what she's gone through? And will Jackson be able to help her heal without losing his heart?

Wow, this story starts with a bang right from the very beginning. Lena is in a really abusive relationship and after a beating that she feared might be the last because he might just kill her this time, she makes a run for it. She's been saving money to try and get away from him but she isn't sure it'll be enough. She finds herself in another town but still scared. She ends up in a bar and the guy instantly realizes that something is not right with the woman at his door.

Jackson owns the bar that Lena walks into and he and his brother also play in a band at the bar. Jackson is known to his friends and family for taking in strays and hurt animals, fixing them and letting them go. So it's really no big surprise to anyone that he wants to help the broken and battered women that walks into his bar. He gives her a safe place to stay for a few days and even tells her she can pay him back by playing his guitar after she played a little when she saw the guitar sitting alone on stage.

Lena rely's on Jackson while she's recovering and deciding what to do next. She starts to trust him a little more and tells him the truth about what happened to her and he seems to know all sorts of people that might be able to help her because of his past schooling and job experience. Lena has to figure out how to secretly and safely get completely away from her husband and Jackson is right there to help her through it.

I have to warn you that this story starts out with a very graphic domestic abuse scene and the rest of the book is how she gets away from said abusive husband and deals with the aftermath of being an abuse victim. At times this book was really hard to read because of my own past with domestic abuse as a child watching it happen and as an adult being the person who was abused. These types of stories can bring up memories better left in the past but it's nice when you get to the end of a book like this and find a happily ever after.

I really liked Jackson, his brother and their friends. This was an emotional story but I'm really glad I read it because I ended up really liking it. Lena is stronger than she knows and I was thrilled that she found a nice guy like Jackson after all she'd been through.