Review: While They watch 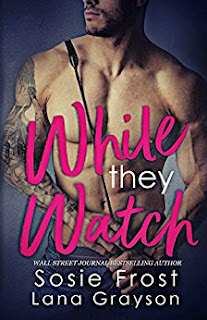 While They Watch is a sexy, new adult romance featuring an innocent former-musician struggling to find her place in the world after abandoning her dream of becoming a concert violinist. Fortunately, she meets a mysterious and dominating stranger who puts her back into the spotlight…but nothing could prepare her for his desired performance.

Warning: This novel is a taboo exploration of exhibitionism, light dominance, and the naughtiest of fantasies. The content may be too extreme/intense for some readers...

Morgan had been in college and a promising violinist. But something happened and she's no longer in college and now works at a cafe. She's supposed to be meeting a couple of her friends at a fetish clubs for a friends night out but they flake on her so she ends up there alone. Over walks Anthony to tell her in no uncertain terms that she doesn't belong there. I would have walked out at that point. I mean, what an ass. But she stays, has a drink and tries to do something nice.

Next we meet Simone who is a Sadist and Dominant as well as the owner of the fetish club. In my opinion she's probably also a serial killer who just hasn't been caught yet. #CrazyBitch

I thought this story was good but the characters really lacked. I didn't like any of them and for different reasons. Anthony is big, egotistical and wealthy. He's used to getting what he wants but he lacked emotion in my opinion. Morgan is innocent, inexperienced and naive. She meets some domineering guy in a fetish club and just decides to do what he wants. There's naive and then there's dumb. Simone is the character I liked the least. She's sadistic, sarcastic and not in a good way and also scary as hell. You don't want to run into this woman in a dark alley. She might beat you with a whip just for looking at her the wrong way.

This book centers around a fetish club, exhibitionism, Dom/sub relationships and the relationship/romance between the couples. If this type of story makes you uncomfortable, then this is not the book for you.

Oh but we're not done. Not at all. You see, I saw this ebook being recommended for me on FB so I bought it because it sounded interesting. If it had just been the first book I reviewed I would have been fine with that but there were two bonus books after the first one. It was the second book in this ebook that really got a reaction from me. I almost didn't finish it and that hardly ever happens. The second book was Takeover, book one of a BDSM trilogy. You'll find out why I had such a hard time reading this one in my review below.

A reckless sacrifice to protect a family legacy...

When tragedy stole my family, my father’s will mandated my future. I didn’t inherit Atwood Industries. I became the only one capable of protecting it.

Atwood Industries belongs only to a male heir, my heir. And my enemies—my own step-brothers—will stop at nothing to create a shared bloodline.

But they’ve made a mistake, and they’ll forever regret trying to control me.

My family’s livelihood depended on acquiring the rival Atwood Industries and seizing the innocent woman bound within its terms of succession.

I never expected such a challenge from my step-sister.

I never thought I’d betray my own blood to protect her from the nightmare we began.

But if I don’t stop her, the woman I’m forbidden to love will sacrifice herself to tear apart my billion dollar empire...

Sarah lost her father and two brothers. Her mother marries someone she despises and now she has a step father and three step brothers who she finds out will do anything to get control of her father's company. And I do mean anything. Her step father tries nicely to buy the company from her at what he considers a good price but she won't hear of it. She produces her fathers will and lets them know that only a male heir can inherit her company. So until she has a bouncing baby boy, the company will stay in trust with her running it.

Her step father gives his sons an ultimatum...kidnap Sarah, rape her, impregnate her and keep her until she has a male heir of their blood line so they can then control the company through the child.

I think at this point you see my problem with this story. These brothers are legally her step brothers and their father is seriously sick, twisted and perverted as well as sadistic. Sarah is shown no mercy by any of them. She is beaten, raped and if the step father finds out her secret...she'll be killed. The brothers are grown men but they are scared of their father and so they go along with what he wants them to do but they also have their own agenda and try to get Sarah to see that they can all help each other without any of them getting killed.

There really wasn't any real redeeming qualities about any of these men and if she falls for them in the next two books *Which I won't be reading* then she's an even bigger dumbass than I thought she was. I would not call this a romance book or story. Once you bring rape into a relationship, it's not romance by any means of the imagination. Not only was the story line vile but it ended on a dreaded cliffhanger. So I didn't even get to see if Sarah got away, got revenge or got her mother away from that psycho. This story pissed me off, made me feel dirty for even reading it and made me want to fling my Kindle across the room. Of course I didn't but it took me a few days to calm down with enough of a level head to even be able to write a review for this.

They say the future is uncertain...
But what happens if I have no past?

The only clue to my past rests in a bundle of blankets swaddled in my arms—a newborn baby girl.

With no leads and no family able to find me, the only way I can learn the truth is if I recover my lost memories myself. Fortunately, I have help.

Detective Shepard Novak, the gorgeous, blue-eyed police officer assigned to my case, is determined to uncover the mystery—and with it, my secrets. But as the days become weeks, the only memories I keep are the ones we’ve made together.

I shouldn’t feel the way I do for him, and I shouldn’t have let him get this close. But I can’t remember a life before him…and I’m not sure I want to search anymore.

Is it worth sacrificing my past for a chance at our future?

The last story in this ebook was the best and that's not saying much. Evie wakes up and discovers she was hit by an ice cream truck, had a baby and has amnesia. Detective Shepard Novak is the first on scene and he helps her try and find her family. After months of looking, no one comes forward for her and she only remembers fragments of memories.

It was a good story but it was so boring. Page after page of her playing with the baby, fretting the baby might have a cold, getting closer to Shepard and trying to remember the baby's father. It's only at the end of the book that we finally figure out who she is and why no one came looking for her. It was just boring, so damn boring.


Have you ever read a book that really made you mad?
Posted by Mary Kirkland at 12:00 AM 22 comments