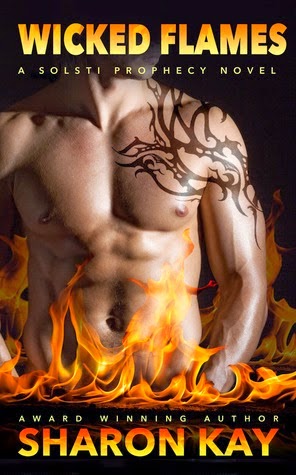 Wicked Flames (Solsti Prophecy #3)
by Sharon Kay
Expected publication: July 2014
Gin Bonham lives with a dark secret. Born with an ability she never wanted, she builds her life around science and logic, running from the terror she is capable of causing. When sexy stranger Mathias spots her on a dance floor and cuts in, he leads Gin in a sensual rhythm that continues long after the music stops. But Mathias hides the fact that he knows exactly what she can do: in the deepest recesses of her mind lurks the power to manipulate fire. Destiny is coming for her and it doesn't care if she’s ready or not.

Mathias possesses tracking and espionage skills so extraordinary that his fellow Lash demons call him The Hunter. Pursue and interrogate. He never fails. When he is tasked with coaxing Gin to work with the Lash demons against a common enemy, he relishes the challenge. But meeting her awakens a new, primal drive that pulls him toward her even as his tactics break her heart.

Failing to win Gin’s cooperation is not an option. But she is determined to flee, putting thousands of miles between her and any other supernatural creatures, including Mathias. Can she cool the charred embers of her emotions enough to forgive Mathias and embrace what she was meant to become? Or will her ability explode into something more than she can control?

Does this sound good to you? You can read my review of it here.