I had to post this, he was so funny this morning.

Lucky video
Posted by Mary Kirkland at 11:24 AM 4 comments

A To Z Blogging Challenge: Q is For Quirky Facts 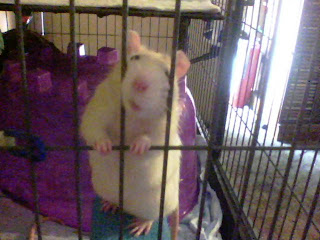 Did you know that a rats teeth never stop growing and they have to gnaw on things to keep them from over growing?

A cockroach can live for nine days without its head before it starves to death.

Seventy percent of the dust in your home consists of shed human skin.

Armadillos, opossums, and sloth's spend about 80% of their lives sleeping.

One reason some bugs have powdery wings is to avoid predation by sticky tongues.

The main ingredient in Worcestershire sauce is Anchovies.

A lot of mass produced foods get their pink, red and purple colors from crushed bugs that feed on red cactus berries.

Canned mushrooms are allowed to have up to 19 maggots per 100 grams of mushrooms (that's drained weight).

Two out of every three couples turn their heads to the right when they kiss.

There is a secret train platform known as Track 61 beneath The Waldorf-Astoria, New York (with a rusty but intact armored train car still on it), which was used in the 1940s to privately squire VIPs—namely President Franklin Delano Roosevelt—into the hotel.

Women with hourglass figures, especially heavy on the butt, tend to be more fertile.

Headache is the most common reason to avoid sex but you will be amazed to know that sex helps in curing headache. Endorphins released during sex naturally reduce the pain of a headache.

Approximately 10% of all single people in the United States have tried an online dating service.

Most recent research indicates just about 9,000 romantic couples each year take out marriage licenses, then fail to use them.

Every rat has that one special spot they like to be scritched... it's that scritching spot that sends them into an adorable trance like state of absolute boggle-eyed bliss. Often accompanied by rampant (and painfully cute) reflexive licking.

Did you know any of these quirky facts?