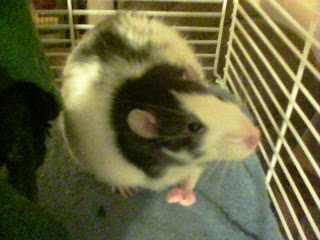 Take for instance Lucky, in the above picture. He was born with only three legs *one of his front paws is missing* but that doesn't stop him from climbing, running, jumping and having a lot of fun. He's my rat with the most energy I've ever seen in a rat. He starts licking anyone that gets their hands or face close enough for him to give kisses and he will play with you. Every morning when I do a spot cleaning in the cages he runs over to me and tugs on my rings, then hops around, comes back and play fights with my hand and popcorns around his cage. He'll play tug of war and after he's done playing will lay down for me to pet him. 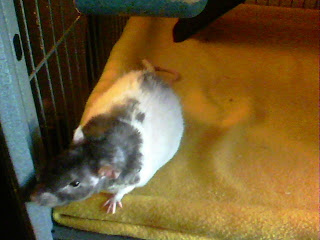 He always come to the front of the cage to see me when I do a morning spot cleaning in the cages and I put my hand in front of him for him to sniff he will nibble all of my fingers and then stare at me until he gets his morning treat. Nibbling my fingers is his way of saying "hi" I think. The cage is right next to the couch in the living room and when Marbles wants a treat he will go to the corner he's at in the picture and stare at Ken who sits on that side of the couch.

When Marbles sees Ken get up and go in the kitchen you can see him getting all excited bouncing back and forth at the front of the cage until Ken comes back with a piece of apple, carrot, cereal, cheese or yogie. Marbles usually snatches it and runs over to his bed. He had Ken trained very well. LOL 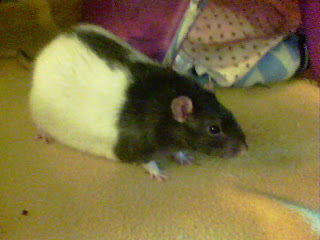 Bandit is my food hoarder/stealer/bully.

When I first got him and his three brothers this one was stealing all the good foods put in the cage and would fight the other rats if they tried to get anything other than the lab blocks.

I put them in a bigger cage which did help and would set up three spots where the fresh foods were in the cage, so everyone could get some. At first he would run to all of the fresh food spots and carry them all back to his hoarding spot and guard it. So I started hand feeding them all a little bit at a time and that would stop him from taking food from the others.

In the past year 2 of his brothers have passed away and he and Marbles are now 3 years old which in his old age has mellowed him out a bit.

Now I just have to set out fresh foods in two spots in the cage, one by Marbles and one by Bandit and Bandit will usually sit and eat from his spot while Marbles is eating his. Sometimes though Bandit will push Marbles up against the back of the cage with his butt and lay on him, keeping him away from the food. That's when I have to separate them and put one upstairs and one downstairs where they will eat and then go cuddle together to sleep.

So as you can see, 3 rats with three distinct personalities.