It was fairly quiet this week but a few homeless people have set up a tent right outside my courtyard and I had been walking on that sidewalk right there when I walk Falcor but they yell at you when you walk by so I've been going the other way. They keep going to the apartment at the end of my courtyard that I complained to the new manager about for probably selling drugs. They have so much traffic at their apartment and the people just stay for a few seconds and then leave. It's pretty obvious what's going on. 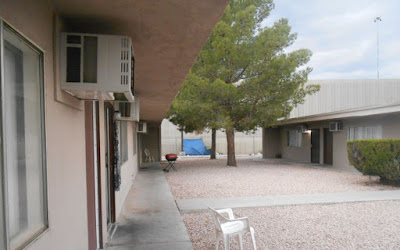 I took this picture from my door. You can see where the homeless tent is. I'm hoping they move on to somewhere else pretty soon. I wouldn't care at all if they weren't harassing people as they walk by. The one guy that is in there might have schizophrenia because twice he's come out of the tent really fast and shouted nonsense at me. Then starts waving his hands around and talks to himself. I'm a little afraid I or someone else is going to get attacked walking by the tent one of these nights. But I also don't want to make these people's lives harder by calling the police on them.