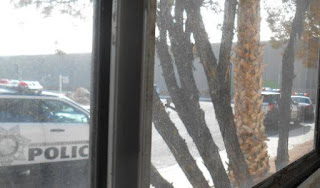 In January of 2016, 3 police cars showed up after the couple who have had the police called on them 7 times since that past Thanksgiving were fighting, and the guy was taken to jail this time. 2 months earlier on Thanksgiving day I had my family over at my apartment when all of the sudden these two people who lived 5 doors down from me started screaming at each other. The female of the couple smashed her hand through their living room window and walked down the walkway in front of everyone's apartment dripping blood all over the walk way because she cut her arm. I called the police and ambulance that day because she was bleeding really badly. The manager finally evicted them a few months later when she had to replace two front doors after the male who lived there kicked them both in, breaking them.