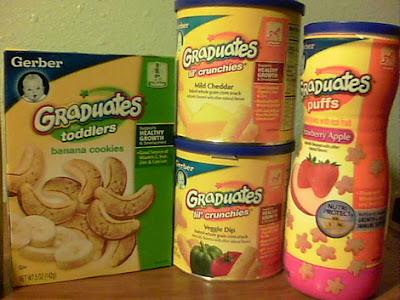 Did you guys know I feed my rats these toddler foods? I do. I even wrote an article about it last year that you can find here.

My guys love those banana cookies and because they are made with real bananas, they are a good treat for my boys.

Back when Brodie was being a finicky eater I had started buying the Gerber baby foods when I couldn't find anything he would eat, and wouldn't you know it...he ate those really well. He loved those dinners and I knew they were good for him. 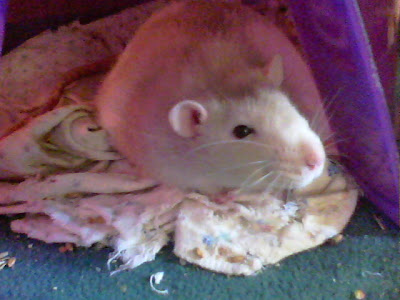 Here's Ares just looking for a Gerber Graduates banana cookie. Now that my daughter is pregnant I have a feeling that my grandson will be sharing his foods and treats with our rats.

Who knew that toddler foods would be such a great treat for rats!
Posted by Mary Kirkland at 1:48 PM 3 comments

When I was 16 years old I read Cujo, which was the very first book I read for my enjoyment and not because some teacher told me I had to for a class project. After that I was hooked on the Horror genre and read everything I could get my hands on, but my favorites were always vampires and werewolf stories. I read everything Stephen King, John Saul and Clive Barker had to offer and wanted more. Then when I was in my early 20's my mom started giving me her books and she only read romance so I reluctantly picked one up and read it...it was Once in Paris by Diana Palmer and I loved it.

When I first started reading romance I read mainly books by Diana Palmer and Nora Roberts because that's what my mom had stacks and stacks of. Later on I realized that there were whole sub genre's of romance books, called paranormals that I had yet to read and so I pounced on them with the tenacity of a wild bear.

The paranormal books gave me a nice balance of the romance and vampires as well as other monsters I had come to love reading about. Now years later there's so many sub genre's it's sometimes hard to keep them straight and really know what you're picking up based on what people are calling it. Is it a paranormal, fantasy, urban fantasy or even a paranormal thriller? How can I tell the difference between all these different types of genres or is there a difference. I actually think there is a bit of a difference and you can tell me if you agree with me.

To me a Paranormal Romance would be set in the normal world and just having paranormal aspects added to the story. Things like ghosts, werewolves, shifters, vampires ect. Twilight would be a good example of a paranormal romance.

Fantasy is set in an alternative dimension, other world and has magic or mythological creatures in the story. Harry Potter would be a good example of a Fantasy.

Urban Fantasy would have elements of crime, mystery or a thriller type feel to it. A good example of Urban Fantasy might be, The Dark Swan series by Richelle Mead.

Paranormal Thriller would be a paranormal story that has a Horror type feel to it or is scary rather than romantic. I'm kinda guessing at this last one because I can't think of any books that fit this description.

I have no idea if I'm right or not, but after reading so many books from the library and having the little stickers on the sides of the books telling me the book is either Paranormal, Thriller, Fantasy or some other type of genre I think I've gotten pretty good at telling some of them apart. I've been reading paranormals now for about 10 years and each year more and more great books are published so I am never going to be able to read all of the great paranormal books out there, but I can try!

Have I left anything out?
Posted by Mary Kirkland at 3:30 AM 3 comments