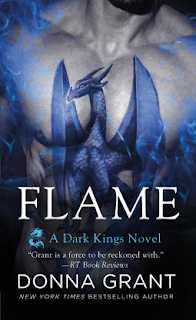 If she believed in destiny, she would believe they were meant for each other.
But that fire was put out long ago. . .

Living among the Dragon Kings, Cain has spent lifetimes learning to distrust both mortals and Fae. He is a warrior born—and every instinct demands that he fight to keep his own kind safe. But when a fringe member of the Dark Fae contacts the Kings with an urgent warning, Cain is torn for the first time. How can he trust this beautiful creature when resisting his primal attraction to her is battle enough?

Noreen is horrified by what her kind and the malevolent Others are planning for the Dragon Kings. Dark Fae or not, there are lines she will not cross—even if it means risking her life. But she never imagined that she would risk her heart until she meets Cain. She wants him with a soul-deep desire that frightens her…and endangers them both. Is saying goodbye to everything Noreen has ever known worth a love that will span time and realms?

Noreen, a dark fae was in danger and needed a Dragon King to listen to her and hopefully help her before he killed her. She had been alive for thousands of years and had once believed the Others belief that The Dragon Kings should be killed, but she no longer felt that way and now wanted to help the Dragon Kings overthrow the Others so they were no longer a danger to the dragons.

Cain is picked to go to Noreen and make sure it isn't a trap and if it isn't offer to help keep her safe from the Others. But she thinks the Others are on to her and she's scared. It takes a little persuasion on Cain's part but she agree's to go with him.

They find the perfect place to hide but there's more to this realm than they first think and they might know who is behind the magical transformation. Rhi is powerful and I knew that from the last book but I didn't realize just how powerful she was. So while Cain and Noreen are talking, getting to know one another more and she tells him what she knows of the Others, Rhi is facing a truth of her own.

Once Cain finds out what he needs to, he heads back to tell his fellow Dragon Kings so they can prepare but not before getting a lot closer to Noreen than he would have thought possible. They make for an opposites attract kind of couple, but it works.

But then a horrible secret comes to light and I could have cried for the both of them. In fact a lot of secrets and betrayals are revealed which led this story in an entirely new way. This story ends up going in a new direction that I couldn't have seen coming and it ended masterfully. I was rooting for the Dragon Kinds and all of their mates. I am loving this series so much. Definitely looking forward to the next book.

Disclosure: I was given an eARC of this book via NetGalley but all opinions and thoughts are my own.