Review: Bite of a Vampire by Anna Belsky 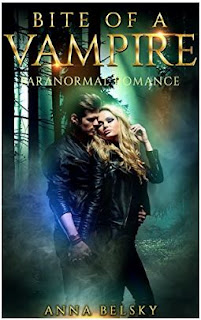 I never was a romance novel kind of girl, maybe that’s why I decided to get in the business of proving that love was meant to be unfaithful. Call me bitter but my full name is Emily Johnson, and I work as a private investigator for Jonesville Extramarital Affairs. It’s my daily job to investigate, snap photos of and usually proves that a spouse has found someone else to dilly-dally with. It was a bit of a dream job after having my own respect and dignity broken so many times in college by a guy named Robert, Bob for short. I don’t hold a grudge against him, he was my first, and he taught me that love relationships are not really things that exist. My best friend Abby doesn’t believe me so I decided to prove my point and become a Private Investigator.

On this night Emily's world turns upside down when she comes across a vampire attacking one of her investigations. She is swept into a world of the supernatural and must draw from all her experiences as Private Investigator to survive... or so she thinks until she meets Michael.

Emily is a private investigator. She doesn't believe in love but she does seem to believe that if a spouse thinks the other is cheating, they probably are. She's on an assignment, taking pictures of a woman who she thinks she's caught cheating on her significant other when she witnesses something that can't be real. Or at least she can't believe is real until faced with the fact that vampires might jut be real and she's now in danger. But who is she in the most danger from? The vampire who wants to save her or the vampire that wants to kill her? Now that's the real question.

Mark lives near Emily and has a night job. He's tall and cute and is interested in Emily. So when he hears Emily screaming from a nightmare, he rushes into her apartment to make sure she's alright.

Michael is a vampire and he's intrigued by Emily but because he's shown some interest in her, his enemy is showing interest in her as well and Michael knows she's in danger. So he shows her who he really is...a vampire. But is Michael there to save her or kill her...that's the big question.

This first book in the series was really interesting and since I love vampire romance and paranormal romance, this had some pieces that I really loved. But and there's a big but here, this felt more like a Thriller with a little romance thrown in for good measure instead of a full fledged romance, at least it did to me.

The big story line is the fact that Emily is in danger and the vampire who is after her is killing woman and someone close to her. There's blood, carnage, ghosts, gruesome nightmares and vampires. There's some hot sex in this book but the romance in this story took a backseat to the thrill of the chase and the murdering that went on. I'm not saying it wasn't a good first book because it was, I just hope we see more romance and a more in depth look at a relationship in the next book. It was free on Amazon when I read it and it might still be.

If you enjoy paranormal romance, and vampires then you should give this book a try.