This week we saw one of our old apartment managers that got fired back in 2012. He came here because he's still friends with one of the guys who lives here.

Back in 2012 he said they got fired because his wife got caught embezzling thousands of dollars from the company and she had 2 civil court cases against her from residents who she borrowed money from and never paid back. She had been taking all the petty cash the office had for paying small things like quick plumber calls, after hours maintenance calls ect. But she had been writing down all of these after hours calls that never happened and pocketing the petty cash.

She had also been messing with rent papers and telling people they were late on their rent on the 2nd of the month even though we have until the 3rd to pay rent and then charging them a $30.00 late fee. And she was keeping all the late fee's that were bogus and she got caught.

Her husband had to sell his motorcycle and give the apartment management company $5000.00 or they were going to file embezzling charges against her. When they moved out of here they went into hiding because of all the charges they were facing. I know because we had been friends with them and the Marshall's as well as the Constable's office called us and came by several times looking for them and asking us if we knew their new address. We didn't know it so we couldn't help them so it was weird to see him the other day.

Then the woman who I had to call the police on a couple of weeks ago was back knocking on my neighbors door screaming that she needed her phone. She left some of her stuff at his apartment when she left and now she wants it back. When he wouldn't answer the door she started knocking on all the neighbors doors. 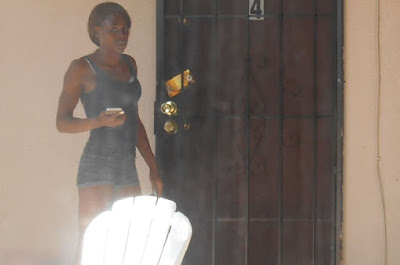 She knocked on my door too but I didn't answer the door. This is the same woman who used to live here and got evicted. She and her boyfriend would get into a big screaming match and she would yell that she was going to f*ck all the guys in this building so she could get money for some coke...and I doubt she was talking about the drink. And yes, she saw me taking her picture so I took the dog outside for a potty break and looked right at her. She just tried to stare me down...didn't work. She said nothing! That's what I thought.

And then on another day the police helicopter was up in our neighborhood but no police cars showed up.