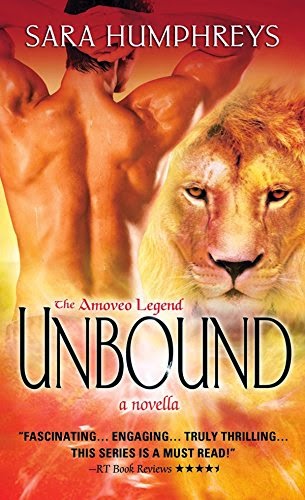 The forces that bind them can also tear them apart...

Zachary McKenna is a warrior shapeshifter from the Lion Clan, trying to catch a break in the sun and surf of Mexico. Mai Tais and scantily clad beach beauties are just what he needs after his last battle. But the fun doesn't last long before a beautiful young woman is mugged on his doorstep and Zach is pulled right back into the fray.

Zach has no idea of the danger Annabelle has unwittingly brought to his doorstep, until he discovers that losing her will almost certainly destroy him...

Zachary is a lion shapeshifter and is in real need of a bit of a vacation after the last battle against the Caedo where he got shot and injured and still has the pain in his shoulder to prove it. He knows he only has 5 years to find his mate before he loses his Amoveo abilities forever and will live as a normal human being but he doesn't know how to go about finding his mate.

Annabelle sometimes had visions when she touched something of a person's, visions that totally horrified her at times. Annabelle has a secret, one that could hurt Zachary and neither one of them understand how her family and her secret could bring so much danger to him and his family.

I've loved the Amoveo books since reading the first one and this one just adds to that love. It's all about Zachary and Annabelle in this one. While a couple of the other Amoveo from previous books do make a short appearance we aren't besieged by other characters or many secondary characters that take us away from the main story and  I really liked that.

Like most Amoveo, Zachary is pretty much an alpha through and through, he is a swoon worthy male and that's for sure. I mean the man can shift into a lion! How is that not awesome? I loved this novella and the entire series and cannot wait to see what else Sara Humphreys brings to us.

This novella will be released on January 6th 2015.

If you have liked the other books in the Amoveo Legend series then you'll want to get this one also. You can find it at Amazon.

Disclaimer: I was given a free copy by the author in exchange for my honest review.