Cover Reveal! Intrigue In The Summer Court by Mistral Dawn 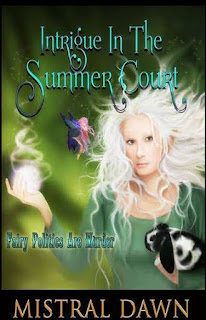 I'm very happy to introduce you all to my friend Mistral Dawn. I've read her first two books and am really looking forward to this one as well. Just look at that beautiful cover! How cute is that bunny, right?

I revealed the title at my Facebook party last Saturday, but have you been wondering what the cover of Intrigue In The Summer Court would look like?  Well, here it is!!!! :-)  Julie Nichols is the talented artist who created it, and I, for one, think she did a totally awesome job!!!! :-)  If you're interested in seeing more of her work, you can find her here:

Her prices are very reasonable.  For ebook covers that the author provides the stock photos for and just need her to manipulate the photos and paint over small parts, she only charges $20!  To include a wrap-around cover that can be used for a paperback, she charges $30.  And for custom-painted covers (like the one above) she charges $100, and as you can see they are well worth the price!! :-)

For people just looking for decorations for their home or desk, she is working on a new Amazon store (she says it will be like etsy) where she will be listing her work for sale soon.  In the meantime, you can find her books here: Julie Nichols' Amazon Author Page

Did I mention she's also an amazing novelist?  A woman of many talents!! :-)  The easiest way to contact her for custom artwork is through Facebook. :-)  And besides being wildly talented, she really is a gem! :-)

Jillian just knows something bad is going to happen!  She's been a loyal adviser to the throne and friend of the queen, Briallen, for thousands of years, and now Roni and Uaine's wedding and coronation are to take place in just a couple days.  The Summer Court will have a new king and queen, who can hopefully repair the damage and heal the schism the late king created.
But Jillian just can't shake the feeling that trouble is brewing.  Many of the Summer nobles aren't happy about the changes that are taking place in the Summer Court, and many of the other Fae just aren't too sure about having a human on the throne...even if she has been blessed by the goddess.  When Angelica, the leader of the Pixies, comes to her with news of a plot to murder the prince and princess, Jillian's suspicions are confirmed.  Will the two of them be able to unravel this conspiracy in time to save the royal couple?  Or will prejudice prevail, and the hope for peace in Fairie be lost forever?

Huh, sounds pretty dire, what do you think? ;-)  Would you like to read some excerpts?  Check these out! :-)

First Chapter Of Intrigue In The Summer Court

Uh Oh! What Trouble Are These Two Up To?

Sinful Sundays Excerpt From Intrigue In The Summer Court

Intrigue In The Summer Court Update and Excerpt

Thanks for stopping by!
Mistral

Posted by Mary Kirkland at 1:30 AM 8 comments

Destined For Genius by Amelia James and a Giveaway 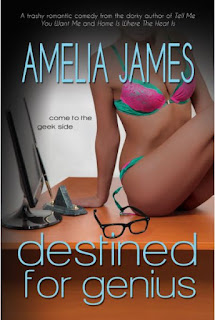 Tired of the shade? Want some fun with your heat? From the dorky, dirty mind of Amelia James, author of Tell Me You Want Me and Home Is Where the Heat Is…
Destined for Genius – a trashy romantic comedy coming July 27, 2015!

Kurt Langston spent one night of hot, decadent sex with the love of his life. But she chose someone else. He's sworn off relationships for good, preferring the company of online friends he's never met, his only connections made through the internet. So when Destiny falls into his arms—literally—he lets her go. Love has no place in his life plan.

Destiny D'argo has no plans. No goal, no future aspirations. Just wing it. Her graphic design business pays the bills—barely—and her part-time waitress job fulfills her minimal need for personal interaction. She has no use for schedules or commitments, especially to a guy who happened to make a lucky catch. So why can't she stop thinking about Kurt?

Their paths intersect again and again, and they can't keep their hands off each other. Neither one of them wants this, but fate doesn't seem to care. Can a free-spirited artist make a real connection with a structured computer genius? Or are they doomed from the start?

About the Author:
I got hooked on trashy romance novels in junior high, but my mom took them away from me. But she couldn’t stop me from daydreaming. After I got married, I wrote some of my naughtier daydreams down and sent them to Playgirl magazine. Two of them got published. I kept daydreaming and writing stories until my dirty stories turned into trashy books.

I live in Colorado, but I’ll always be a loyal Wisconsin Cheesehead. When I’m not lusting after my next bad boy hero, I’m looking for inspiration in sci-fi and action movies, football players, morally ambiguous lawyers, muscle cars, and kick-butt chicks.

Giveaway: this is the Rafflecopter code. The giveaway begins on 7/13 and ends on 7/28. The prize package is: a $25 Amazon gift card, a Trashy keychain, and two Amelia James chocolate bars.
a Rafflecopter giveaway

“Fucking is always fun.” The small smile blossomed under his declaration, so he pulled her arms free and draped them around his waist. “There was this one girl in college, at a frat party—”

“They have fraternities for geeks?” She clamped her mouth shut as soon as the words spilled out.

He dragged the pad of his thumb over her lips, and they immediately softened. Kurt made a note to thank JT for teaching him that trick. “I had to maintain a three point seven five GPA to be a member.”

She slid her hands into his back pockets again. “And you had...?”

Access granted. “Three point nine seven.” He rested his hands on her shoulders and slipped his fingers under her short sleeves, caressing her warm skin.

Kurt winced. “Don’t call me that.” Hearing her say the nickname his friend had given him conjured images he’d rather not face at the moment.

She raised an eyebrow, but didn’t argue. “Okay. What about the girl?”

“Huh?” The only girl he wanted was currently tugging his zipper and creating havoc with his memory. “Oh her.” The previous data came back to him. “We got a little drunk and had sex in the hot tub, right in the middle of the party. No one knew.”

“I’m sure everyone knew.” She finally managed to slide his zipper down, dragging her fingers along his erection as she did it.

Fireworks exploded in his pants, but Kurt couldn’t let her do all the touching. He dragged his hand down her back and snuck it under her shirt. She’d put it on without caging those cute bare tits in a bra. Maybe he could steal another squeeze. “Yeah, you’re probably right. I never got her name. Never saw her again.”

“Why can’t I be like her?” She rested her butt against the wall, effectively pulling away from him.

His hand froze, but when she arched her back, he realized she was giving him more room to move, not trying to stop him. “Well, for one thing, you’re much prettier.” He reached up and cupped her bare breast.

She pressed into his palm. “Really?”

“Oh yeah, all these wild curls,” he slid his other hand into her hair, “so soft. Your deep brown eyes, soft brown skin. Wow, you’re cozier than my favorite pillow.”

She looked at him like he’d said Han Solo shot Greedo in self-defense, but then the skepticism faded and she smiled.

“And your smile could power the Death Star’s shield generator.” Rein it in, dork. He dragged his thumb over her nipple.

She reached down between his legs. “So is this.”
Posted by Mary Kirkland at 12:30 AM 6 comments