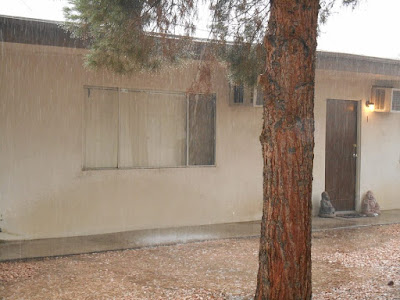 This happened 2 years ago with a different apartment manager than we have now.

This overhang was supposedly fixed so the rain water wouldn't leak through the overhang and go on to the walk way, but as you can see, it was not fixed and the water was coming down heavy right there when it rained. 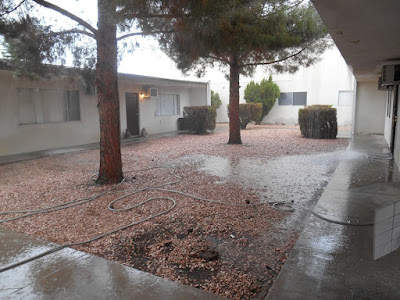 That night my manager calls at 11pm to see if Ken would look outside and see if the overhang was leaking and as you can see it was during the day so that night when it was really coming down it was leaking even worse.

The roof on my building and the one across from me was supposedly been patched and sealed after a crap roof job that cost $22,000 for both roofs. So at 11pm my apartment manager calls here and asks if Ken can go outside and see if the over hangs were leaking. O.o what? He was sleeping so she asked me to look outside and see if my overhang was leaking and of course it was because the roofers did a shit job. I still can't believe she called my apartment at 11 fricking pm instead of getting off her lazy lazy ass and going to look for herself like a manager should have done. She lived on property in the next courtyard! The water came right through the over hang on my side as well and right onto the walkway there as well. This didn't get fixed until the next summer. But at least it got fixed.

It was fun trying to walk around here when it rained, that's for sure.

So that's it for this week's Apartment Hell  Life! Be sure to come back next week for more.
Posted by Mary Kirkland at 12:00 AM 31 comments