This is a weekly blog post that I'm calling Apartment Hell  Life. I've mentioned a few times some of the crazy things that go on in and around my apartment complex in the past 24 years that we've lived here and people keep telling me I should write a book. But instead of a book, I've decided to share the crazy things that have happened in and around my apartment complex in the last 24 years here in a weekly blog post.
Last week I told you about people crawling into the drainage tunnel. I thought I would post an article I read a while back about the tunnels under Las Vegas. This way you can see some of the tunnels I was talking about. It's not just the sewer tunnels but also the wash tunnels that were built to catch the water when we get flash floods and tunnel it away from the streets that used to get super flooded before we had the wash tunnels.
---- 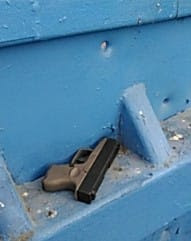 Wednesday morning around 6am, I was walking Falcor and spotted this gun on the garbage can. I didn't touch it but it sure looked real enough. I went back out just a little while later to bring it in and call the cops but it was already gone. I wanted to get a plastic bag to wrap it in so I wouldn't touch it but it was gone.
---
I found out that drug dealer is in jail and will be there until at least August. I didn't see the arrest but one of my neighbors told me it happened. You may remember this post from a month ago where drug dealer's apartment was raided. I found out that one of the druggies that drug dealer was messing around with went to jail and she got mad when drug dealer wouldn't bail her out so she snitched on him and told police that he had a bunch of drugs in his apartment. I was wrong to assume that they didn't find any drugs that night because they did but they didn't make an arrest until recently. That's what drug dealer is in jail for right now.
My neighbor who is friends with drug dealer's wife told me that the wife has let 4 druggies move into the apartment with her while her husband is in jail. One of the guys that she let move in is a guy she's fooling around with. Sure sounds like they have a good marriage *eye/roll* since each of them are messing around with other people. So there has been a crap ton of traffic down at that apartment. I walked by yesterday and could see 8 people *all druggies* sitting on the floor in the living room. With that many people coming and going from there I just know there's going to be some trouble breaking out at some point so I'm watching for it.
The high this week was 105F/40C
The low this week was 77F/25C
So that's it for this week's Apartment Hell  Life! Be sure to come back next week for more.
Posted by Mary Kirkland at 12:00 AM 48 comments