Review: How To Date A Dragon by Ashlyn Chase 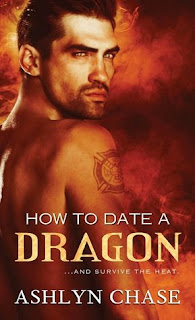 Bliss Russo thought nothing exciting ever happened in her life. Until her building caught on fire and she had to be carried out of the flames in the arms of a gorgeous fireman. Sure, her apartment is now in shambles and she'll have to start her huge work project completely from scratch. But at least her love life is finally looking up...if only she can find her red-hot rescuer again.

Dragon shapeshifter Drake Cameron is the last of his clan, and the loneliness is starting to claw at him. He's met only one woman who might be able to stand the shock of his true nature. After all, she barely batted an eyelash when her home burned down. And feeling her curves against him was just as hot as the inferno. Just when he thinks he'll never track her down, she walks into his firehouse—with no idea what she's about to get herself into.

Bliss wakes up to her apartment on fire and runs right into a firefighter on his way in to save her. But she forgot to get her laptop and she needs it as it has her work on it. She talks the firefighter into going back in for it and she feels bad when he gets suspended for going back in.

Drake is a dragon shifter so when he went back into the fire to get the laptop for Bliss, he was in no danger of getting burned but no one else knew that. He wants to find a nice female dragon to settle down with and have dragon babies because his species is almost extinct but when he meets Bliss he knows he might just settle for the right human.

Drake wanted to meet a female dragon shifter but the one he does meet ends up being someone he can't see himself with even if she can't take a clue or ten. Drake and Bliss meet back up after the fire and go out and the sparks are flying between them right away. They had great chemistry together and Bliss is really great under pressure. Things are thrown at her and she never really breaks down or lets it get to her.

There's a lot going on in this book, the other paranormals, the Greek mythology that gets wrapped around this story and some of the crazy characters that show up in this book are just a few of the things going on. But there's also a lot of fire drama and everything that comes with that. Who is starting the fires? Why? How and why does it seem like Bliss is being attacked again and again.

I liked the story but I wasn't too thrilled with the ending. I just didn't buy her reaction to the new job offer, it didn't make a lot of sense to me and I didn't really care for that entire 'job offer' part of the story or how it ended. But it was well worth the read.