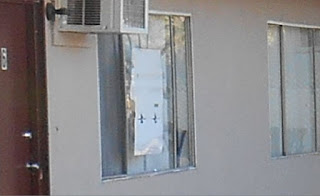 A while back I took a video recording of my neighbors arguing and I said it went on for 3 hours, well these are those neighbors. Last week I heard from other neighbors that they started arguing at midnight and then about an hour into their loud arguing, one of them busted the living room window out from the inside. I was already asleep by that time so I didn't hear a thing. The next morning when I took the dog in the courtyard this is what I saw. They had taped cardboard to the big hole in the window.

The manager still doesn't know about it but when she does find out about it she'll tell them the same thing she's told others. It's $75 up front to replace the window. If they don't pay for it, it will not get fixed. It's gonna be hot as hell pretty soon and you don't want that big hole in your window letting the cold air out and the hot air in. They have 3 small kids in that apartment. I feel sorry for them.