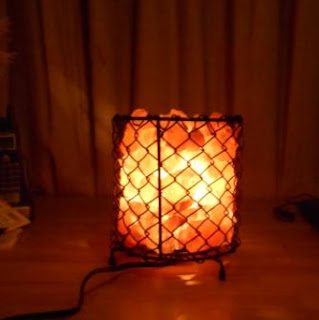 Himalayan salt lamp emits number of negative ions into surrounding atmosphere when it is heated by an external source of electric or candles. The heat produced from the lamp breaks down Na CL Sodium Chloride in a process called ionization. This process is enhanced by natural process of NACL and resulting in producing of negative ions which eliminate the positive ions which are present in our surroundings produced from Computers,refrigerators, T.V sets and etc. Thus these lamps make the air clean, fresh and healthy to live in. Natural Salt is found in ancient evaporated sea beds underneath great mountain masses, such as the Himalayas, where it has been compressed over time to form solid salt rock, with all the minerals structurally intact. 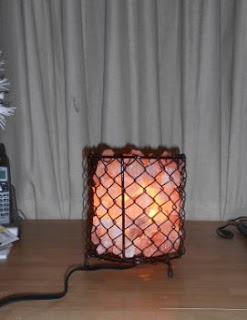 I love this lamp, it's bigger than I thought it would be and it's so pretty and relaxing when I turn it on. I don't know about any health benefits and don't know if I even believe that but it's such a great conversation piece and such a pretty lamp to have in any room.

Now there was just one thing that I have to complain about. I really loved that this had an on/off switch on the cord but when I went to use it to turn it off..it wouldn't work. I tried several times and it works sporadically. Maybe once out of every 10 times I try to turn it off will it actually work, so that's why I'm not giving this 5 stars. I don't know if they try the switches out before they ship them out but this one doesn't work.

It comes with two bulbs, the salt rocks, basket and the cord. It has enough salt rocks to completely fill the basket and when the light is on the rocks give off a really pretty light orange light.

Disclosure: I was given this product at a discount but all opinions are my own. 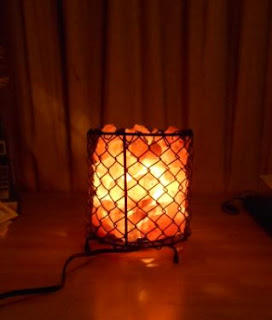 It does make for a very pretty and unique lamp. There are actually several different kinds and some are made with one large piece of salt rock. I kind of liked the basket with the smaller salt rocks though. If you'd like one, you can find this one here.