So last year I was out taking Falcor for a walk and spotted this car. Most of the windows were smashed, the tires were flat and at one point someone had thrown a grocery cart right through the windshield but I didn't get a picture of that.

So I called the non-emergency police number and reported a suspected stolen car that had been dumped. There was glass all over the ground around this car. 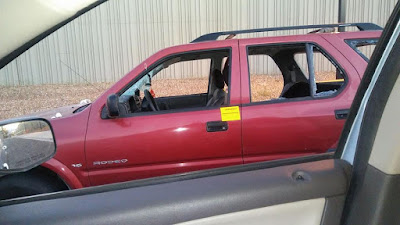 The police came and put that yellow sticker on it. My daughter took this picture from her car when she came over the next day. 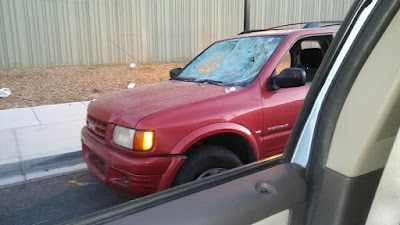 My daughter took this picture of the windshield too. The car stayed there for 3 days before it was finally towed away and the police were there checking the inside before the tow truck took it away.

This is the first time I've seen a dumped car on my block. I've seen a few cars with smashed windows because someone stole something out of the car but this was a first and I was a little surprised it took 3 days for it to get towed away after I called to report it.