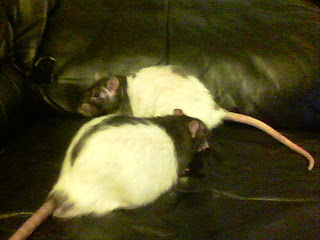 In rat breeding there are a few gene mutations that have made for some interesting varieties of rats, although their health could be at risk from these mutations.

Rex
I have a rex rat, Marbles. His hair is patchy in places on his face, curly in other places and completely missing in others. He also has curly whiskers. Most rex rats have soft curly hair or very little hair. Some rex rats have tightly curled hair so it sometimes looks like a perm, while others have beautifully, soft, luxurious waves.

Hairless
Hairless rats are usually made when you breed two rexes together. They are usually healthy but can have persistent skin problems and because they sometimes don't have eyelashes to keep debris from getting in their eyes they can also have eye problems. I knew one lady who had several hairless rats and had to switch to cloth bedding because the Carefresh bedding she was using kept getting stuck under the eye lids of her rats and she would have to take them to the vet to get it cleaned out.

Manx
Manx are also called tailless rats because they are born without a tail or only have a small finger like appendage that sticks out much like a hamster tail. The major problem with Manx rats is they can be born with impairment to the nerves of the bowels and bladder. They also can be born without hip sockets and pelvic bones. But the biggest problem for Manx rats is the threat of heat exhaustion since the tail regulates the body temperature.