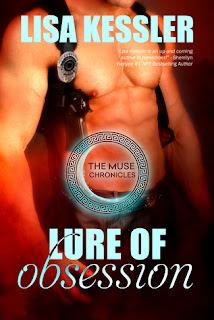 Melanie Jacoby is the human vessel for the Muse of Tragic Poetry, but she isn't prepared for the tragedy of finding her roommate dead at the bottom of the stairs.

Nate Malone is the detective assigned to the case, but as the evidence points to an accidental fall, the visions begin. He sees a killer in a gold Kronos mask.

Mel is the next target, but Nate's determination to protect her is almost as strong as his desire for her.

And tragedy isn't part of his plan.

The Prophecy - "Every generation the nine daughters of Zeus are reborn, and with their rebirth are also nine Guardians. They will be marked by the gods, and given gifts to protect his treasure. Their abilities will only be unlocked when they find their muse."

This is the first book in the Muse Chronicles series. From the blurb I could tell this would have a little Greek Mythology thrown into this paranormal romance story and I love that kind of story.

Melanie is the holder of the muse for tragic poetry and I didn't understand exactly what that meant for a while but right from the beginning of this story bad things seem to happen around her. Which is how she meets Nate. He's her guardian and he has visions to help protect her.

Melanie and eight other women found each other, each with a different muse and they were trying to open and theatre. There's also evil people who are trying to kill all the muse's off in the name of the Titans. When the danger gets really close to Melanie, Nate has no choice but to make sure that she and the other women are safe. They aren't sure who is after them but they know someone is.

The action, danger and mystery surrounding the people who are out to get the muses, goes on for most of the book. I just knew that more tragedy would strike and Nate wouldn't be there to stop it like he had before but there are some crazy twists in this story that really ramped up the need to know what would happen.

I really liked how this ended and am looking forward to reading the other books in this series.