This is on the path that I walk Falcor. I don't think that I've ever pointed out just how close the freeway is to where I walk. I've know I've talked about the wall that separates the freeway from where I walk but just to give you an idea I took this picture. The sound wall is all the way on the right and because the walkway has a curve in it right here, they stopped the wall, put in a fence, moved the wall over to the left and started the wall up again. You can see the freeway through the fence and there's just a little padlock stopping someone from walking onto the freeway right there.

The freeway is right there through the fence. I see kids climbing that fence and playing right there all the time.

Here's a close up through the fence. As you can see, the only thing beyond the fence is a concrete barrier.

People routinely leave bags on clothes on this fence for the homeless that live in the area. There used to be 3 tents set up right on the other side of the fence but the police made the homeless people move.

Yesterday I was a guest reviewer over at I Smell Sheep where I reviewed Toxic Game by Christine Feehan. I hope you'll pop over and let me know what you think of my review. 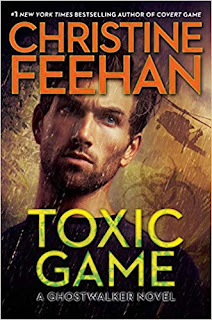 On a rescue mission in the heart of the Indonesian jungle, Dr. Draden Freeman and his GhostWalker team need to extract the wounded as quickly as possible—or risk spreading a deadly virus unleashed by a terrorist cell. When Draden gets infected, he forces his team to leave him behind. He won’t risk exposing anyone else. He intends to find the ones responsible and go out in a blaze of glory....

Shylah Cosmos’s mission is to track the virus and remain unseen. Her enhanced senses tell her that the gorgeous man eradicating the terrorists one by one is a GhostWalker—and his lethal precision takes her breath away. When he’s hit by a lucky shot, she can’t stop herself from stepping in, not knowing that by saving his life she’s exposed herself to the virus.

There’s no telling how much time Draden and Shylah have left. Racing to find a cure, they quickly realize that they’ve found their perfect partner just in time to lose everything. But even as the virus threatens to consume their bodies, they’ve never felt more alive.