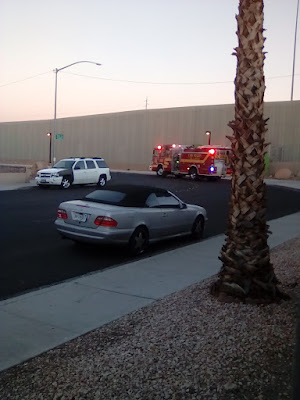 A fire truck was parked outside of my apartment building this week. They went to drug dealer's apartment but no one came out and they left soon after they arrived. 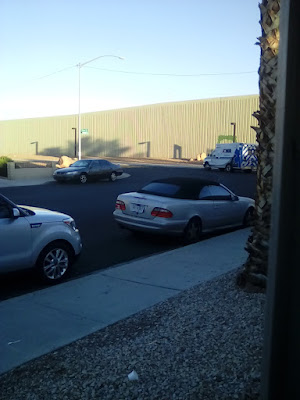 The next day an ambulance went to drug dealer's apartment and one of the druggies that go there all the time was taken out in the ambulance. She was awake though so I don't know what she was going for. 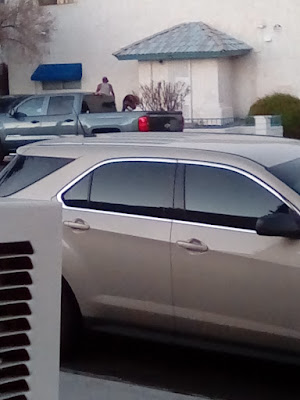 I haven't talked about the guy in my building who has the homeless brother who is a drug addict. The homeless brother hasn't broken any of his windows lately and I even saw the brother that lives here giving the homeless brother food and blankets the way the other brother that lived with him used to before he passed away.
Well the homeless brother was across the street yelling at some guy and just vomiting his guts up. There a water spout against the wall of that building they are standing in front of and he kept drinking water and then would throw up again. It's been really hot here so I don't know if it was the heat or the drugs or a combination of the two that made him so sick. I saw him go into that guys apartment across the street and I saw him the next day and he seemed fine.
--- 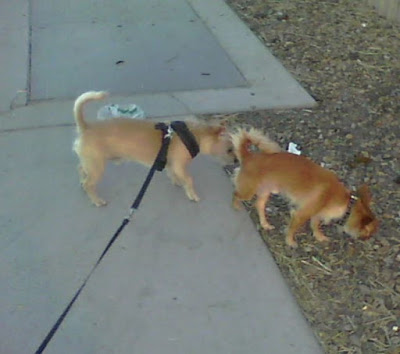 The little dog that's offleash is Buddy. His owners often just open the door and let him out to go potty. He will sometimes go on an early morning walk with Falcor and I and Falcor loves it. Then he walks back with us and goes home. I hate seeing so many dogs offleash though.
Funny enough two other dogs walked into my apartment this week. One was my elderly neighbors dog and isn't much bigger than Falcor. He's always offleash as well. He pushed his way in when my daughter was walking in the door. Then he came and said hi to everyone and left. Thankfully Falcor gets along with him because he's not much bigger than him.
A couple of days later my daughter was sitting outside with my neighbor who had his dog outside with him and when my daughter came inside for a second she left the screen door open and the dog poked his head is. I saw him and grabbed Falcor because Falcor doesn't like big dogs and I knew he was going to act overdramatically which he did. The big dog is a big sweetie and even though Falcor got in his face before I could pick him up and snapped at him, he just ignored Falcor and sniffed around my place until his owner came in and got him. Poor Falcor walked around the apartment for about 20 minutes after that sniffing everywhere and letting off the occasional bark to let me know he was still pissed off. LOL
---
I put a work order for a leak coming from my AC. My carpet's wet, the water isn't draining in or outside. They forgot to remove the rubber plug so the water can drain to the outside. I think it's leaking into the wall.
He came out the next day. I told him the little rubber stopper just needed to have a hole drilled into it so the water could drain.  He acted like I didn't know what I was talking about. I even pushed on the rubber stopper myself and showed him the water would come out. He said, "Oh it's supposed to do that." I said, "Ok, but the water is draining into the wall. Is it supposed to do that?"
He acted like I was a dumbass and said, "Well now. hold on and let me investigate this a little bit before I start drilling holes into things."
Then he looked at it, knocked on my door again and said, "You're right, that shouldn't be there." I'll just poke a hole in it and it should be fine. The water started draining out immediately. At least it got fixed.
---
The high this week was 112F/44C
The low this week was 78F/25C
So that's it for this week's Apartment Hell  Life! Be sure to come back next week for more.
Posted by Mary Kirkland at 12:00 AM 37 comments