What is Hashimoto's Thyroiditis?

I've talked about this a little bit in the past but the more info that's out there the better in my opinion. A couple of my friends have recently been diagnosed with thyroid problems and my husband has also. Back when I was in my teens and trying to figure out what in the heck was wrong with me, I had never even heard of the Thyroid or Hypothyroidism. But I had it and with all the symptoms I told my doctors about, they never once checked my Thyroid levels or connected the dots to figure out that I had Hypothyroidism until I was well into my 20's.

Of course this article was written a few years ago and some things have changed. Some of the smaller nodules I had have disappeared but the one larger nodule I have has stayed the same size and I'm told won't go away without surgery. *which I'm not doing* I tell my husband it's a good thing I'm over weight and have a bit of an extra chin because if I didn't this nodule would be really prominent on my neck. You can only really see it if I tilt my head back, but it's about the size of golf ball.

Have you ever had your thyroid levels checked? It's just a simple blood test. Do you know if you have any symptoms of hypothyroidism? Here is a list of some of the most common symptoms..

If you have nodules like I do, the doctor will most likely send you to a radiologists office to have a biopsy of the nodule. I've had 4 of them and they've all been negative for cancer.

I will say that when I went to radiologists office they have several radiologists there and I never saw the same one twice and each of them have their own way of doing things. The first biopsy I had was painless. But the other three were not. The radiologists told me that either my nodules were very deep and the medicine was cycling out of my thyroid very fast and he couldn't keep it numbed up or that it wouldn't hurt much and all he ever numbed up was the skin. Those were painful and I decided after the 4th one coming back negative that I was done having biopsies.

Now if you're wondering what a nodule when it gets bigger like mine would look like, I decided to show you. I wasn't sure whether or not I wanted to post this but this is what it can turn into. 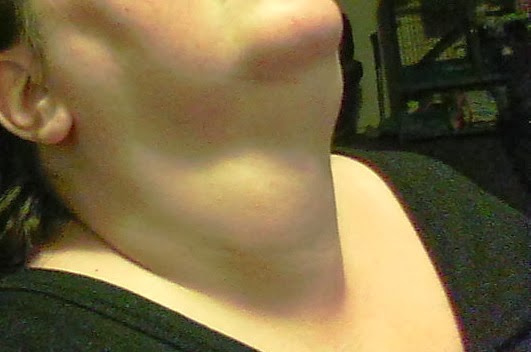 It's been there for years and I'm used to it now. It's really only visible when I have my head tilted back like this. I could have it surgically removed but I don't do well after anesthesia at all. Plus I really don't want to have a surgery unless I really have to. I'm just not at that point yet.

After finding out that I had Hypothyroidism and nodules I then found out that I had something called Hashimoto's Thyroiditis, which is an autoimmune disease. What it means that the immune system attacks the thyroid gland as if it were a foreign substance that shouldn't be there, resulting in inflammation and hypothyroidism (under-active thyroid).

Most symptoms get better after getting on the right amount of thyroid medication but the medication doesn't always work for every patient. I'm one of those patients that it really didn't help. I still have muscle cramps like crazy and weight gain that is really hard to control.

My husband was diagnosed with Hypothyroidism a few year ago as well and it got me thinking what could be causing ours and other cases of this disease to be popping up all over the place.
Posted by Mary Kirkland at 12:00 AM 7 comments