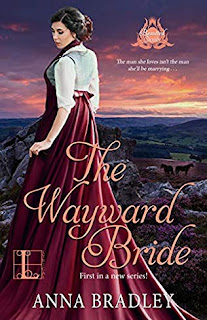 In only six weeks, Isla Ramsey is due to marry Henry Northrup, the sixth Earl of Sydney. But she remains haunted by memories of the dashing Hugh Courtney, the Marquess Pierce. The handsome aristocrat had hinted at forever and then tossed her aside, leaving Isla with few viable options. Now, as she awaits her new fiancé’s arrival from London, she rides her horse past Hugh’s estate at Hazelwood every day, pining for a man who was never truly hers.

Hugh Courtney may have left Isla’s life, but he can’t erase her from his thoughts. When he rescues her from a sudden snowstorm, they are forced to take shelter together at his private estate. In such close quarters there is no escaping each other. Yet no man wants a reckless wife—or a woman promised to another. As fate draws Isla further into his world, Hugh vows to keep her out of his bedchamber. However, some vows are meant to be broken . . .

Isla set out on her own for a ride even though the sky looked like it would open up and drench her at any moment. She had hoped to spot her betrothed in his carriage coming for her but there wasn't any sign of him. She had snuck out even though she had told her sister in law that she wouldn't because it didn't seem safe to ride in bad weather.

Henry is her betrothed but it's Hugh that tends to keep her mind occupied at times, especially when she rides by his estate. So while she's out on her ride, the horse gets spooked and runs off further into the woods, getting them lost. Hugh and her brother go out looking for her and Hugh finds her and brings her back to his estate.

While Isla is recuperating at Hugh's estate, Henry is having some problems of his own which is why he never showed up for her when she expected him to. But He's found himself admiring and attracted to someone else, which is a problem for him.

I really liked the double story lines that were going on in this book. It was really two different romances going on at the same time which was fun to read. Hugh and Isla were fun to watch and it was fun to see them find each other again after they thought they were going to have to spend their lives apart with other people. Henry's story was a surprise but I liked the addition of it and how his story played out.

I don't usually read historical romance much these days but I won this book in a Goodreads giveaway and it sounded pretty good so I figured I'd give it a go. It was a good read and I had a good time with it.