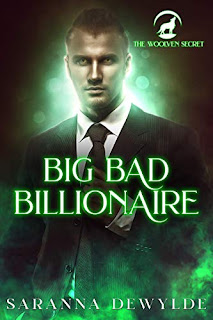 Book Description
Blake Woolven is the bad boy CEO of Woolven Industries, but he’s badder than the luscious, BBW Randi Rutger would’ve guessed. After Woolven took down her father’s company and devoured it like a shaking rabbit, she’s determined to get close to him and make all the Woolvens pay for destroying her father. Blake knows Randi’s agenda, but the wolf inside him will do anything to have her. Even expose the Woolven family secret. When Randi sees Blake and his brothers shed their skins beneath the moon, she’s terrified. But it’s just what she needed to bring him low—that and the silver nitrate plasma gun her father designed. With her loyalties torn, Randi must choose between avenging her father and the big bad wolf who clawed his way into her heart.
My Review
Randi thinks that Blake killed her scientist father so she is out to ruin him anyway she can. She stands up to him in his office and offers to break the code on the project her father was working on if Blake gives her a job but she lets him know that she plans to take him down and ruin him for what she thinks he's done.
Blake is a werewolf and as soon as he meets Randi, he knows that she is his mate. Only problem is she hates him and blames him for her father killing himself. Her father was a scientist and was working on some secret project for Blake's company but now he needs Randi to read the code that her father put all of his notes in.
After signing all the papers to come work for Blake, she is informed that she is to take up residence where he lives because that's where her father's lab was and where he and his family live. Randi doesn't know what to believe when Blake shows interest in her because not only does she think someone like him would never go for her but he knows that she is there to ultimately bring him down. But no matter what she thinks, she cannot ignore how he makes her feel when he turns on the charm and after she starts to believe that he really does like her she finds out something about him that changes things.
Along with the struggling relationship, there seems to be a war brewing between the different wolf packs. Not only that but a certain vampyr (Vampire) crossed Blake and he's not happy about it.
Randi is no shrinking violet. She can hold her own and ends up being one badass heroine who can stand up to whoever she needs to. Which is why when she finds out what Blake and his family are, she freaks out a little but quickly comes to terms with it. She seems to take everything that's thrown at her and it was a lot, with grace. Sure, a girl needs a little time to come to terms with things but she does and proves that she is very much the right mate for an alpha.
There's a huge twist and a few turns that don't seem to go the way I was thinking. The overarching plot is left open for this series but the romance between these two is concluded by the end of this book. I'll have to read the next book to find out what happens with the vampyr's, his uncle's new bride and the war.
I really liked this book and look forward to reading the next book in this series.
I give this book 5 out of 5 stars.
Posted by Mary Kirkland at 12:00 AM 22 comments