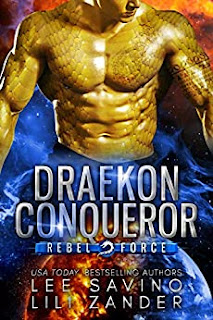 Book Description
I’ve lived an eternity. I’ve killed thousands. Destroyed worlds.
I thought I’d seen everything. I didn’t think there was anything left in the galaxy that could surprise me.
Then I met her. Lani Dennison. A human woman. My mate.
My mission was simple. Find Lani Dennison.
Zorahan scientists tortured her. I killed them, of course.
Okaki pirates abducted her. I tracked them down and infiltrated their ship. Routine stuff. Nothing that presented a problem to a trained soldier that could shift into a fire-breathing dragon.
I expected her to be smart. You’d have to be, to survive the Okaki pirates.
I didn’t expect her to be lovely.
I didn’t expect her to make me laugh.
And I definitely didn’t expect her to be the one woman I was destined to be with, the missing piece of my soul.
My mate.
Now what?
My Review
Ruhan had been in stasis for 1000 years but once he woke up and is tasked with infiltrating a Zorahn ship to find two human females that have been kidnapped, he figures this will be an easy job. He's not expecting to find his mate though and when he finds Lani, he finds his mate.
Lani was kidnapped, and she keeps herself alive by giving the aliens something they want. She is smart and that's the only reason she's still alive. So when Ruhan says he's there to save her, she's not sure she can trust another alien but he gets her off the ship so that's one plus for him.
This is the second book in the series but the first book that I've read. I didn't really feel lost so you can read this as a standalone but I plan on going back and reading the first book since this one was very interesting and I want to get to know his brothers.
Ruhan was so much fun to get to know. I have a soft spot for shiters but an alien who is also a shifter? Sign me up. He was so great with Lani, since he knows that she's gone through a lot in the time she's been held captive he takes things really slow with her.
Lani was a very smart woman too. She gave her captors something that they wanted in order to stay alive, she told them stories. I love that about her, she's very witty and creative but also smart and strong. These two really made the best couple. When they run into danger, they realize how much they care for each other and that made the story even better.
I give this story 4 out of 5 stars.
Amazon
Posted by Mary Kirkland at 12:00 AM 18 comments